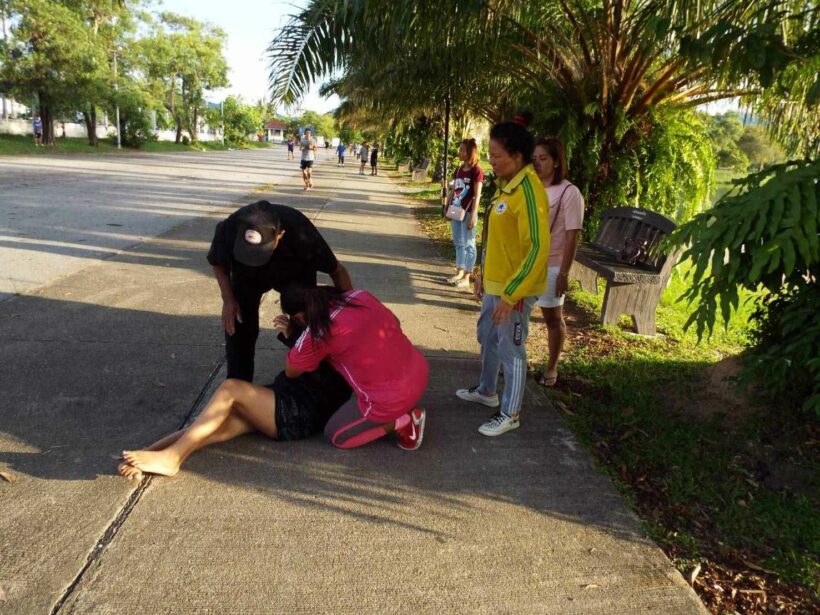 Thalang Police were notified of an incident at Bang Maruan Lagoon in Srisoonthorn by 61 year old Amnuay Imurai, who is a local security man, yesterday afternoon (May 15).

Police and rescue workers arrived at the scene to find a woman age around 35, apparently drunk. Mr Amnouy and people who were exercising at the lagoon were trying to stop the woman from another attempt to jump into the lagoon. The woman was taken to Thalang Hospital.

The distressed woman kept repeating… “Why did my life end up like this?”

Mr Amnouy told police that “I was strolling around the park. The woman, carrying a bag on a motorbike stopped here at the park.  She was wearing different shoes and heading toward the lagoon.”

“The woman just walked to the edge and jumped into the water. I immediately jumped in as well and rescued her from the water. People who saw the incident also helped to pull her out. The woman kept crying and repeating herself. She insisted that she wanted to jump into the water again. So I called the police whilst trying to console her.

After taking the woman to hospital police have alerted local mental health services.