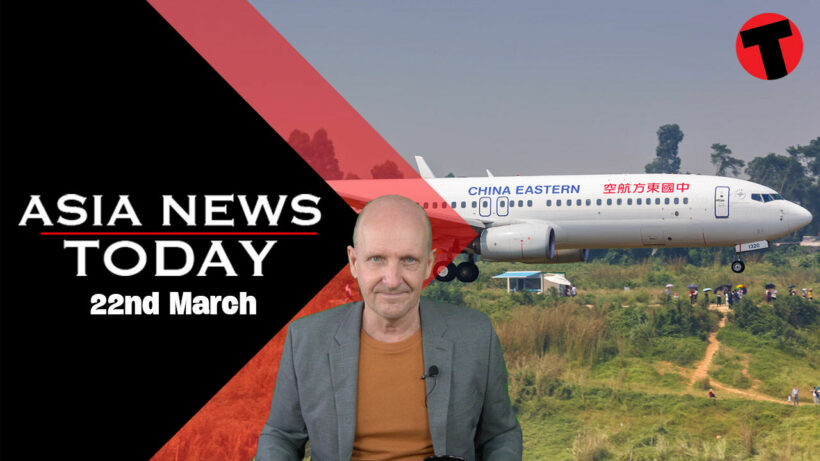 Investigators are now trying to piece together the final moments of a Boeing 737 flight in southern China yesterday before it plummeted into a hilly area as it was approaching Guangzhou. The China Eastern Airlines Boeing 737 jet, flight MU5735, carrying 132 people crashed in Wuzhou. The sudden nosedive of the plane has left aircraft accident specialists baffled as authorities struggle to piece together the jet’s last minutes. The plane was at cruise altitude when it suddenly went into a severe dive, plunging 26,000 feet in roughly 1 minute, 35 seconds, almost straight down. Intact wreckage of the plane has been found, indicating the plane broke up before hitting the ground. Flight trackers report the plane was flying for just over an hour before the incident leading to the crash. The plane was a 6 year old 737-800 aircraft, not one of the new 737 Max models… 2 of which crashed back in 2017 and 2018, leading to their worldwide grounding. Chinese Eastern Airlines says it is grounding all its Boeing 737-800s and that “the aircraft currently in the air would not carry more passengers after landing”.The safety record of China’s airline industry has been among the best in the world over the past decade after a bad run in the 90s. The last major incident at China Eastern Airlines was back in June 2013 when a Brazilian-built Embraer SA jet skidded off the runway while landing at Shanghai airport. The Boeing 737-800 model does not have the equipment or software that led to 737 MAX crashes… that’s the MCAS software, but that may not make a difference to Chinese passengers or the Chinese national regulator known for scrupulous safety requirements. Investigators say that such accidents typically involve multiple factors, and aviation experts are warning that it’s far too early to draw any conclusions on the potential causes. China was the first country to ground the 737 MAX after the 2 fatal crashes in Indonesia and Ethiopia, and remains the only major market where the MAX model jet has not resumed commercial flights.

Twenty-six passengers have been reported missing after an Indonesian fishing boat carrying mostly migrant workers, sank off the coast of North Sumatra. Some people have been found alive, after drifting for two days. At least two have already been found dead. The wooden boat was reported to have been carrying 86 passengers when it capsized and sank last Saturday in heavy seas. The captain and three crew members all survived. Authorities say the passengers were mostly migrant workers who were heading to Malaysia to find work. The boat was trying to navigate through an unguarded route to Malaysia through the notorious Malacca Strait. According to survivors, the boat sprang a leak soon after departing and was then hit by strong waves before capsizing. Indonesians illegally seeking work in neighboring Malaysia often risk dangerous sea journeys, and accidents remain common due to capricious weather and poor safety standards on the old fishing boats.

The Japanese government has issued a power shortage warning for the first time in areas covered by the Tokyo Electric Power Company. While there are some thermal power plants still offline after last Wednesday’s powerful earthquake in the region, power demands are expected to increase as the temperatures drop due to poor weather. The Japanese government and the local power company are now calling on households and businesses to save electricity by turning off unnecessary lights and turning the heater temperature down to a lower setting. The request covers Tokyo and eight other prefectures. Operations are still suspended at six thermal power plants in the service areas of TEPCO and the Tohoku Electric Power Company.

And whilst we’re in Japan…. about 20% of Japanese companies operating in Russia had already suspended business by the middle of this month after Russia invaded Ukraine, including Toyota Motor Corporation which had major manufacturing facilities in the country. Of the 168 listed Japanese companies that had production or sales bases in Russia, 37 of them, or 22%, say they are suspending exports, local production or retail operations by March 15. But at this stage, no firm has confirmed that it has pulled out of Russia completely. Many of the companies said there was massive confusion in the supply chain, including the difficulty of finding parts or products due to the economic sanctions imposed against Russia. Globally, an increasing number of companies, such as Apple and McDonald’s from the US, have shut down or scaled back their operations in Russia. A recent survey shows that the protracted nature of the invasion and a lack of progress to find a peaceful solution is forcing more companies to look at pulling out of the country on a permanent basis.

The Philippines is easing restrictions to allow foreign ownership of airlines, telecommunications and shipping operations, as it looks to new ways to boost employment and drive new activity in the Covid-hit Filipino economy. The island nation has long struggled to attract foreign investment, with copious paperwork, corruption and political uncertainty scaring off investors who have pumped money into Philippe’s neighbors instead. The amendments to laws pertaining to foreign ownership of Filipino companies is the latest effort to attract foreign investment and increase competition in some of the sectors long dominated by a few local players or controlled by virtual monopolies. Outgoing President Rodrigo Duterte says he signed off on the changes hoping that the easing of foreign equity restrictions “will attract more global investors, modernise several sectors of the public service and improve the delivery of essential services”.The foreign equity restrictions will be eased in several sectors including telecommunications, shipping, airlines, railway and subway transport. The amendments will not apply to sectors classified as public utilities, such as water and electricity distribution. In those cases, foreign equity remains capped at 40 percent.

Hong Kong is looking to relax some of its Covid restrictions in April. One will be the lifting of a ban on flights from nine countries, reducing quarantine time and reopening schools. The moves have been announced by Hong Kong Chief Executive Carrie Lam. Residents in the Chinese-ruled territory have become increasingly frustrated with the stringent restrictions and impediments, many in place for over two years. The current ban on flights from Australia, Britain, Canada, France, India, Nepal, Pakistan, Philippines and the USwill be lifted from April 1.

Myanmar’s military rulers are relaxing a nighttime curfew in the capital Naypyitaw, in a further attempt to show the outside world that the country is returning to some sort of normality 13 months after the military coup which removed the elected government and kicked off a year of civil violence. A nighttime curfew has been in place after the country erupted in anti-coup protests following the coup on February 1, 2021. Now, the 10 pm to 4 am curfew in Naypyitaw is to be reduced to midnight to 4 am. But, the rest of the country will still be under the original 10 pm to 4 am curfew. The change in the chapel’s curfew has been announced to coincide with the annual Armed Forces Day parade in the capital on March 27. Well, we wouldn’t want to miss that. Intelligence experts still say the military regime remains unable to control large swathes of Myanmar, including the north, northwest, southeast and south remain where anti-regime strongholds remain fierce and well armed. Naypyitaw, though, has seen only relatively few attacks against government offices in the last year. Just last week the Burmese government announced a reopening of the country’s tourist industry to international travellers.