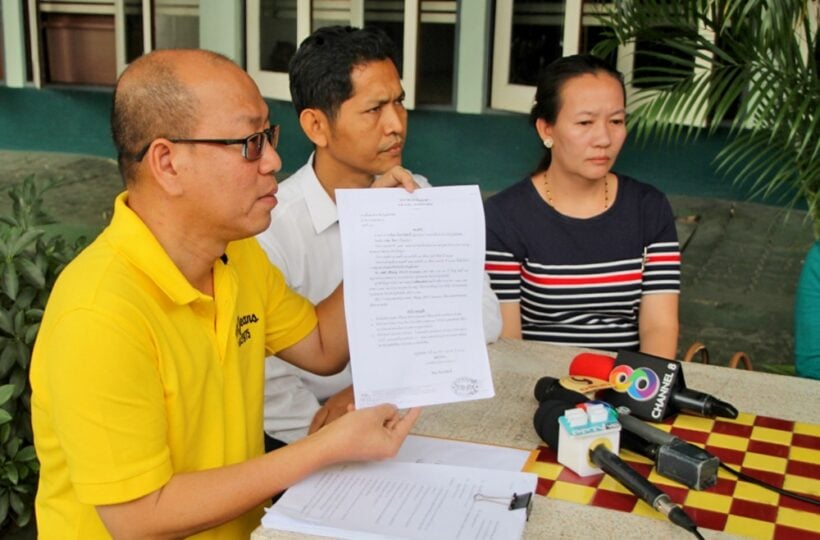 A Cambodian couple, engaged in a legal battle with relatives, yesterday filed a complaint against two Thai police officers in Bangkok.

Baby-clothing exporter 43 year old Sing Thea and his wife Chean Kallyan say their previous accusation – that their relatives had embezzled 18 million baht – had been handled by the Thai officers in question. This had resulted in a counter-suit against the couple, who were then charged with filing a false police complaint and each had to pay a 140,000 baht bail bond.

“Despite the fact that we are the cheated victims, we have no money left to invest in our business and are now facing the false-complaint lawsuit too,” the couple said yesterday.

“It made me angry that the cheaters stole our money so they could hire others to help them get away with the wrongdoing,” said Chean.

“And I, a victim, end up being a criminal-case defendant in Thailand. I didn’t do anything wrong. Please help us get justice.”

Lawyer Atchariya Ruangratanapong accompanied the couple to file the complaint. He said that Sing and his wife had in 2014 filed an embezzlement complaint with Boonthan at the Bang Yai precinct, accusing their younger relatives – Thai man Saichon Pulsawat and his Cambodian wife Phetch Salaiman – of allegedly stealing a total of 18 million baht while helping out Sing’s baby-clothing business over the previous decade. That case is still under consideration by the public prosecutor.

Atchariya said Saichon and Phetch then protested their innocence to Kritchanan, claiming that the elderly Cambodian couple had wrongly accused them. He then handed over the case file to the people they were complaining about without registering it in the system. Atchariya said the report was then sent to a lawyer who used to work for Kritchanan, who promptly filed a counter-suit on behalf of the Thai-Cambodian couple, accusing Sing and his wife of fabricating evidence and making a false accusation.

The Nonthaburi Court accepted the case for trial, making Sing and his wife criminal case defendants, Atchariya said. He urged that Kritchanan be investigated and possibly be transferred so he could no longer interfere with the case.

Atchariya said that Phetch was also wanted by a Cambodian court for suspected fraud. Provincial Police Region 1 deputy commander Pol Colonel Watcharin Prasopdee received the Cambodian couple’s complaint and said it would be examined as soon as possibleto see if there were grounds to launch a fact-finding investigation.