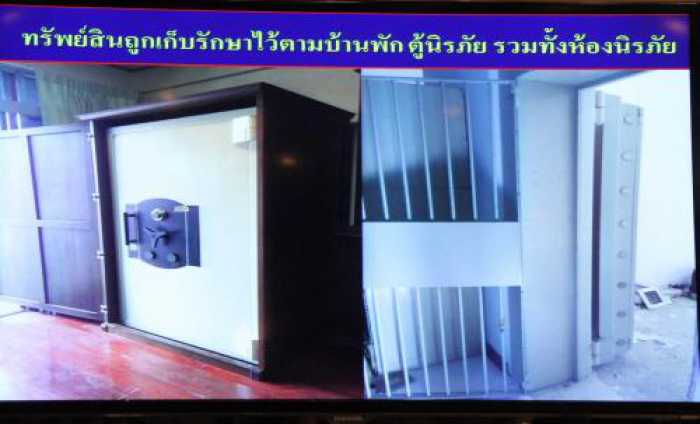 used to demolish the wall of a vault at one of 11 houses owned by the former Central Investigation Bureau (CIB) commissioner. Many other shots showed a large number of ancient Buddha images and other belongings.

National police chief Pol General Somyot Poompanmoung said police were extending their probe into the corruption scandal and believed that more hidden items would be found.

Asked why former Royal Thai Police chiefs had not been aware of wrongdoing on such a huge scale, Somyot said he could not read the mind of the previous police leaders, but “with me at the helm now, I will make arrests regardless of how high-ranking the wrongdoers are”.

Hiding assets by burying them or putting them in underground vaults is a practice considered unusual under the anti-money laundering law, which subjects violators to immediate seizure of assets, Anti-Money Laundering Office secretary-general Seehanart Prayoonrat said yesterday.

He added that those involved in the case are entitled to clarify which items seized were lawfully acquired, along with proof, before the assets are handed over to the agency.

As for the other two suspects – former Samut Sakhon immigration police chief Colonel Kowit Muangnual and wife Sudathip – Seeharat said both of them were also subject to seizure of assets, pending verification of their assets by AMLO officials.

Speaking at the press conference, acting Crime Suppression Division commander Pol Colonel Akkharadej Phimolsri said many of the vaults they discovered were built in order to distract people from noticing other, better hidden vaults in nearby areas.

“Several deposit boxes buried underground were found in the house, in addition to many wooden closets containing many items,” he said.

Golden postage stamps, which the colonel said were rare and expensive, were among the items found, which included rare portraits and paintings, ivory and a large number of Thai and US banknotes. Experts from the Fine Arts Department have been helping the police identify the artefacts.

Apart from the 11 houses owned by Pongpat that where searched last week, raids were also conducted at four other locations – including the homes of former CIB deputy chief Kowit Wongrungroj and Pol Colonel Akkharawut Limrat, a former CSD officer. Akkharawut is believed to have committed suicide on November 20.

The huge cache of assets found at Kowit’s penthouse including expensive cars and motorcycles, he said. Akkharadej said Kowit acted as the right-hand man of Pongpat in their quests for money.

Bunseub is also accused of getting up to Bt2 million per month from petrol smugglers since December 2001 up until July this year. Bunseub allegedly gave some Bt35 million to Kowit and Bt118 million to Pongpat.

Somyot said Pongpat, Kowit and Bunsueb were the subject of petitions lodged by many policemen who complained they had been transferred unfairly or faced demands for money from the three officers.

Speaking about the high-profile arrests for the first time, Prime Minister Prayut Chan-o-cha said the case would undergo normal processes in the justice system. He said the issue involved certain officers, but not the entire police force. He added that legal action taken against the high-profile officers was part of the much-awaited reform of the Royal Thai Police.