“Measles is more contagious than tuberculosis or Ebola, yet it is eminently preventable with a vaccine that costs pennies.”

Thailand figures in the Top 10 countries in the world where measles cases rose alarmingly in 2018. Most of the rises of Measles cases in Thailand have occurred in the three southern-most provinces where a large Muslim majority live.

In some Muslim traditions it is against the teachings of their religion to allow children to be vaccinated. Between September and November last year, 14 deaths and more than 1,500 cases were reported in the southern provinces.

98 countries reported more cases of measles in 2018 compared with 2017, and the UNICEF (United Nations International Children’s Emergency Fund) warns that conflict, complacency and the growing anti-vaccine movement threatens to undo decades of work to tame the disease.

“This is a wakeup call. We have a safe, effective and inexpensive vaccine against a highly contagious disease – a vaccine that saved almost a million lives every year over the last two decades,” said Henrietta Fore, executive director of UNICEF.

“These cases haven’t happened overnight. Just as the serious outbreaks we are seeing today took hold in 2018, lack of action today will have disastrous consequences for children tomorrow.”

“Measles is more contagious than tuberculosis or Ebola, yet it is eminently preventable with a vaccine that costs pennies.”

The World Health Organisation reports that cases worldwide had soared nearly 50 percent in 2018, killing around 136,000 people.

Ukraine, the Philippines and Brazil saw the largest year-on-year increases in cases. In Ukraine alone there were 35,120 cases, nearly 30,000 more than in 2017.

Brazil saw 10,262 reported cases after having none at all the year before.

The resurgence of the disease in some countries is being linked to medically-baseless claims linking the measles vaccine to autism, spread in part on social media by members of the so-called “anti-vax” movement.

The WHO last month listed “vaccine hesitancy” among the top 10 most pressing global health threats for 2019.

“Almost all of these cases are preventable and yet children are getting infected even in places where there is simply no excuse,” Fore said.

“Measles may be the disease, but all too often the real infection is misinformation, mistrust and complacency.”

“Despite the astonishing figures many anti-vaxers refuse to comprehend the problem they have caused and the misery they are inflicting on innocent young children.” 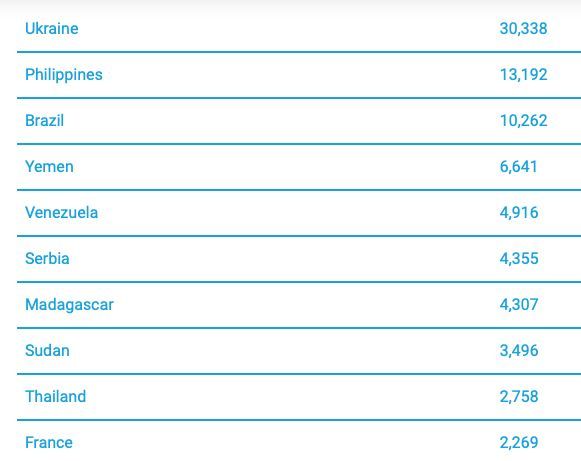