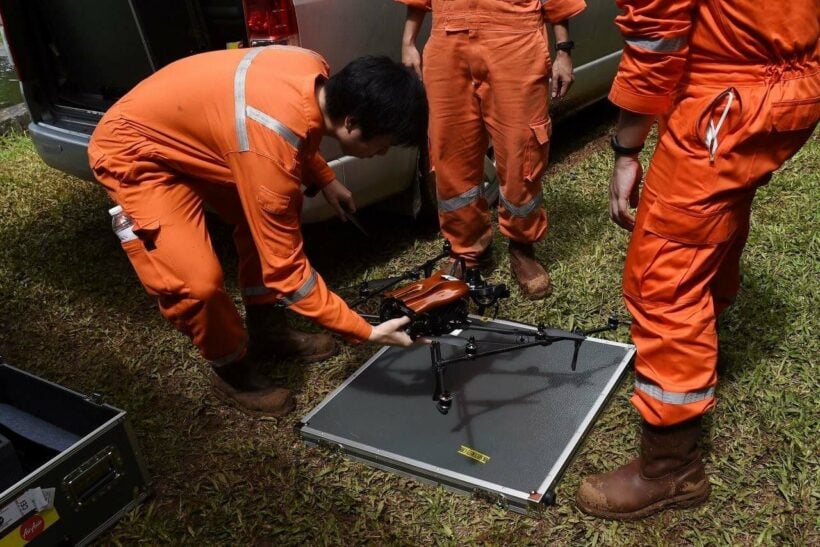 Academics, experts in the local geography and local people are pitching in to provide scientific data about the Tham Luang cave network. This local intel will support the official rescue mission for the youth football team believed trapped inside.

Those working on the rescue speak of a tough operation, a battle against nature, in which human ingenuity is being pitted against elemental powers in a bid to alter the balance and free the trapped footballers.

As of press time, the mission to pull 12 teenaged footballers and their assistant coach out of the flooded cave in Chiang Rai’s Mae Sai District has not succeeded despite six days having passed since the group was trapped inside by a flash flood.

Knowledge and analytical power is being brought to bear on this difficult problem by many experts, including geographers from the public sector and various universities, who have stepped up to share their expertise. They hope to fill in the knowledge gaps left by incomplete surveying and geographical examination, by applying their expertise in geography, geology, mapping and hydrology to seek ways into the Tham Luang cave network.

Anukoon Sorn-ek, an independent geographical expert and leader of their team, said there is a lack of clear information about the complex cave network and the mountain above.

“From my observation when working with the official team, I have found that the official agencies’ teams still have a problem caused by the lack of geographical and hydrological data for the area, so most of the operations were executed without guidance and planning based on scientific data,” Anukoon said.

“Therefore, we can see that many missions failed, because of the lack of proper knowledge and information about the terrain.”

He said that his team was thus working against the clock to gather as much information and scientific data as possible to provide to the rescue teams in order to let them plan and make decisions based on analysed information. The group’s discussions led to a strategy to seek information on the hydrological nature of the area so that they could advise on how to maximise water drainage from the cave. They found that the rate of natural water outflow from the cave system was only five cubic metres per minute, while the water inflow to the cave from rainwater over the mountain was as high as 25 cubic metres per minute. They set up a precipitation measuring gauge at their main operation centre in Ban Pha Sak Village, around three kilometres away from the cave.

They have also tried to fly drones over the mountain to map out all major sinkholes to support the effort to reduce water inflow to the cave system and find alternative entrances to the cave from above. The team also assisted the support team from the United States Air Force with their data and led them on a mission to survey the mountain. Meanwhile, the situation inside the cave has slightly improved, according to a military news source, as the level of floodwater has lowered due to decreased rainfall and from drilling in the caves. The water level, however, remains too deep for the Navy SEALs to reach the inner part of the cave to find the missing football team.

“The water has reduced to the same level as Wednesday, and now we can access the third chamber of the cave around three kilometres from the entrance,” the source said.

“However, there was a leakage of electricity inside the cave, and we have had to shut it off, which make the officers’ operations inside the cave harder from lack of light.”

The source would not say whether there was anyone hurt from the electrical leakage, but many ambulances have been seen rushing to the cave entrance. Chiang Rai provincial governor and leader of the rescue operation, Narongsak Osottanakorn, dismissed the reports and said that some officers had fainted from insufficient rest.