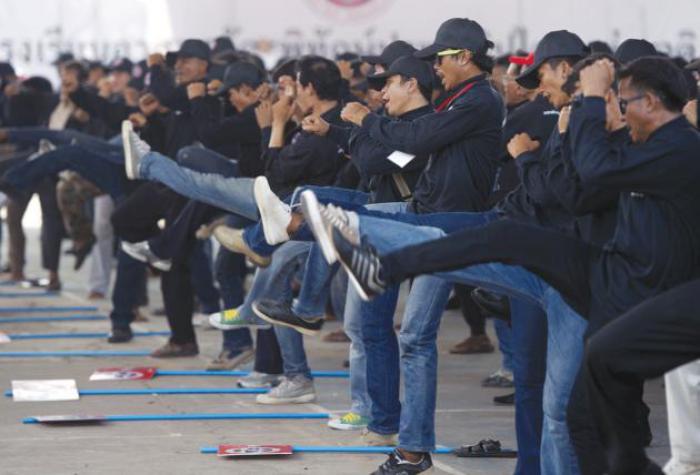 3,000 police and troops for red rally
Phuket Gazette / The Nation

PHUKET: More than 3,000 policemen and soldiers will be dispatched to take care of the pro-government red shirts’ mass rally near Bangkok today amid increasing concern there could be clashes between pro- and anti-government groups or outbreaks of violence.

For many observers, there is fear that the country is careering towards a dangerous new phase of civil conflict. Some 19 companies of a joint force of police and military personnel – totalling more than 3,000 – will be stationed in three areas around the planned rally site on Aksa (or Utthayan) Road, on the western fringe of the capital.

The areas are Phutthamonthon III and IV Roads and Thawi Wattana, said Sirima Sunawin, a spokesperson for the government’s Centre for the Administration of Peace and Order (CAPO).

Checkpoints will be set up in those areas to screen passing vehicles for weapons, she said, adding that joint police-military patrols would also be conducted in the three areas.

A public opinion survey has found that most people are concerned there could be violence during the latest red-shirt rally.

Almost 70 per cent of 1,394 respondents said a large number of participants could lead to a violent incident or clashes, as some participants might carry weapons, according to the Rajabhat Suan Dusit University survey, findings of which were released yesterday.

The anti-government People’s Democratic Reform Committee will today hold a meeting of its leaders from around the country and abroad.

It will take place at the PDRC’s Lumpini Park rally site and the group says it has no plan to march anywhere.

About 100,000 red shirts are expected to gather on the edge of Bangkok today to show support for the government, red-shirt leaders say. The figure has been adjusted down from their previous target of 500,000.

Their rhetoric has reached a crescendo over the last few weeks, matching an intensifying barrage of legal challenges that could lead to caretaker Prime Minister Yingluck Shinawatra’s removal from office, AFP reported.

A long red-shirt rally in the capital in 2010 led to the death of 90 people and injuries to about 2,000 others. Many buildings in Bangkok and some government offices in the provinces became targets of arson attacks, and some red-shirt protesters were sentenced to jail for arson.

He said CAPO had assigned his deputy, Pol General Worapong Chewprecha, to be in charge of the force, whose role is to keep the situation under control. It will focus on preventing clashes between different groups of people with different opinions, which is his main concern, he added.

Metropolitan Police commissioner Pol Lt-General Camronwit Toopgrajank yesterday said he was confident there would be no violence or other trouble during the red shirts’ rally.

However, police would prevent the pro- and anti-government groups from gathering close to each other, he insisted.

Meanwhile, the Army has added more checkpoints in border areas and on the roads leading to Bangkok in a bid to prevent the movement of weapons ahead of the rally, spokesman Colonel Winthai Suvari said yesterday.

CAPO has requested the Army send two companies of troops, or about 300 soldiers, to help police maintain law and order during the rally, the spokesman said.

He said the 58 companies of troops were already dispatched to 176 locations throughout Bangkok would remain intact.

Caretaker Labour Minister Chalerm Yoobamrung, who is in charge of CAPO, said yesterday no weapons had been found among the red shirts heading to Bangkok.

Chalerm also rejected as groundless reports in the social media that migrant workers would be hired to take part in the rally to boost the number of participants.