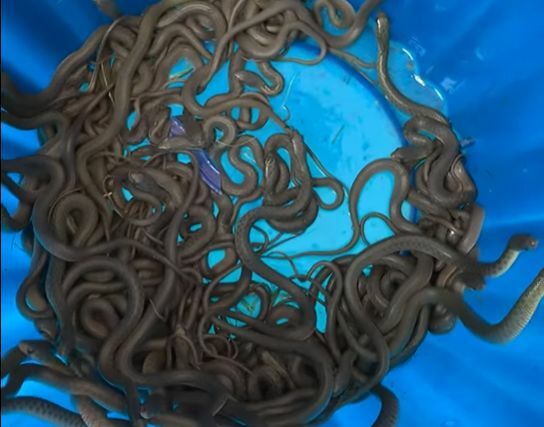 For the first time in hisssstory… more than 100 snakes popped up out of a flooded sewer in eastern Thailand’s Chon Buri province. The snakes were caught and safely released into a natural setting yesterday afternoon, fangs to some brave volunteers.

Water from “Ang Kep Nam Nong Nam Kiao”— or “The Green Reservoir” — in Chon Buri province was released yesterday causing a nearby sewer to flood. The flood pushed a whole snakes’ nest up from the sewers.

Facebook user “Chu Diy” posted pictures and videos of an army of baby snakes swimming near the surface of the sewer, surprising netizens across the kingdom. Brave volunteers can be seen flinging snakes up into the road.

At first glance, the baby snakes look similar to cobras, which would be a problem seeing as juvenile cobras begin producing venom from the moment they are born.

Luckily, the snakes turned out to be juvenile yellow-spotted keelbacks — i.e. fowlea flavipunctatus — which are non-venomous and harmless to humans. The semi-aquatic snake inhabits lakes, ponds, swamps and flooded rice paddies.

The snakes’ housing situation has drastically improved since the volunteers moved them from the sewer into a natural setting yesterday afternoon.

HolyCowCm
At first glance I did not even think cobra, but pretty much exactly what they are. I see these things all the time at my house since I have a creek on the other side of my back yard fence…
Ramanathan.P
May be wanted to go back home for long holidays to spend time in their hometown....

AdvocatusDiaboli
On 4/12/2022 at 12:33 PM, Thaiger said: For the first time in hissstory… over 100 snakes popped up out of a flooded sewer in eastern Thailand’s Chon Buri province. Obviously the sewer outlet of the Thai Parliament. I will leave…