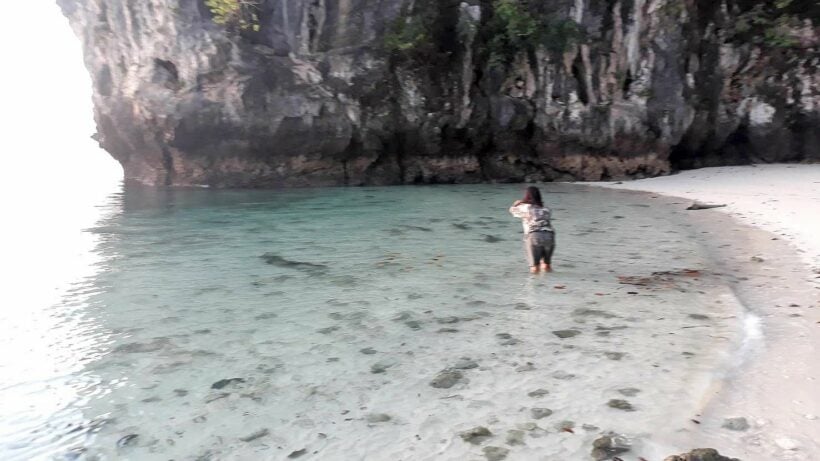 The Chief of Koh Hong National Park of Than Bok Khorani National Park, Jampen Pompakdi, has revealed that more than 10 blacktip reef sharks have been spotted hunting for small shellfish by a number of tourists at Koh Hong.

The sharks were about 2 metre long and the biggest is believed to weight about 100 kilograms. They were gray and had black fins.

After spotting them near the national park office, the officers took a boat to see them in the water and found that they didn’t seem to be frightened by humans at all. They were swimming in only about a metre of water and took about half an hour to hunt for food before swimming back to the deep water near a coral reef nearby.

The Chief of Bok Khorani National Park, Weeeasak Srisajjang, said that the blacktip reef sharks are quite often spotted near Hong Island. This is the fourth time already this year. They usually live near the deep water in the coral reef around the island.

“This is a sign showing that Hong Island has a lush ecology. We have strictly controlled the tourists not to destroy the ecology system and prohibit any illegal fisheries that damage coral. The blacktip reef sharks show little signs of ever attacking a human. They usually just eat small fish and are commonly found in the Andaman area. They usually hunt during night time or early morning and hide amongst the coral reef during the day. Apart from the blacktip reef sharks we also spotted whale sharks at Hong Island, which is rare.”

“I would like to ask tourists and fishermen not to harm these fish if you find them. They are not dangerous and eat only small fish and planktons,” he noted.