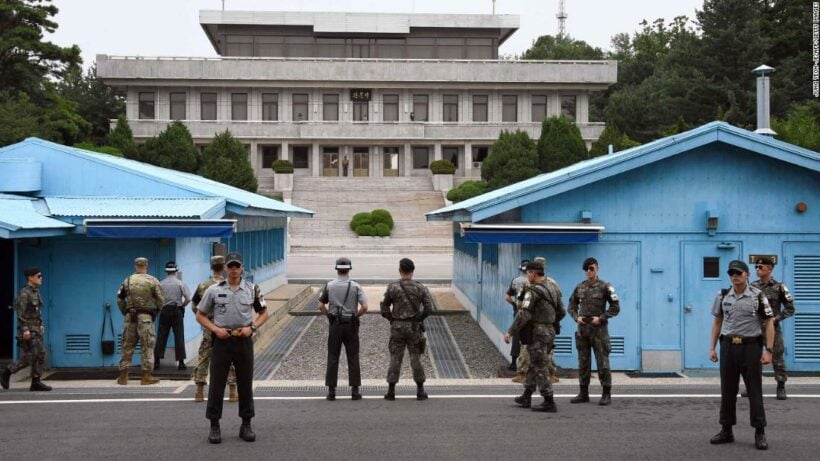 The Korea Herald is reporting that a momentous meeting is about to take place, tomorrow in fact, between the leaders of two (technically) warring nations – North Korea and South Korea.

According to Im, Kim will cross the Military Demarcation Line between the Neutral Nations Supervisory Commission offices, where he will be greeted by Moon.

The Korean War aka. “Fatherland Liberation War”, was a war between North Korea (with the support of China and the Soviet Union) and South Korea (with the principal support of the United States). The war began on 25 June 1950 when North Korea invaded South Korea following a series of clashes along the border. The UN, with the United States as the principal force, came to the aid of South Korea. China came to the aid of North Korea, and the Soviet Union also gave some assistance to the North.

The fighting ended on 27 July 1953, when an armistice was signed. The agreement created the Korean Demilitarized Zone to separate North and South Korea, and allowed the return of prisoners. However, no peace treaty has ever been signed, and according to some sources the two Koreas are technically still at war, engaged in a frozen conflict. Wikipedia

According to Cheong Wa Dae, the decision to include a honor guard review was made in light of North Korea including the ceremony during late Presidents Kim Dae-jung and Roh Moo-hyun’s visits to Pyongyang.

Kim Dae-jung visited Pyongyang in 2000 for the first inter-Korean summit, while Roh visited the North Korean capital in 2007. Both former presidents met with Kim Jong-il.

Friday’s summit will then begin at 10:30am. at the Peace House.

Im said that the talks will adjourn for lunch, and resume in the afternoon, after Moon and Kim take part in a tree-planting ceremony.

“The two leaders will plant a pine tree, a symbol of peace and prosperity, on the MDL that has symbolised conflict and division for 65 years,” Im said.

The tree, which is said to have germinated in 1953, the year the armistice was signed, will be planted using soil gathered from Hallasan on Jeju Island and Baekdusan in the North.

The summit talks will resume after the ceremony, at the end of which Moon and Kim will sign a joint agreement.

Read the rest of the article about this historic summit HERE.