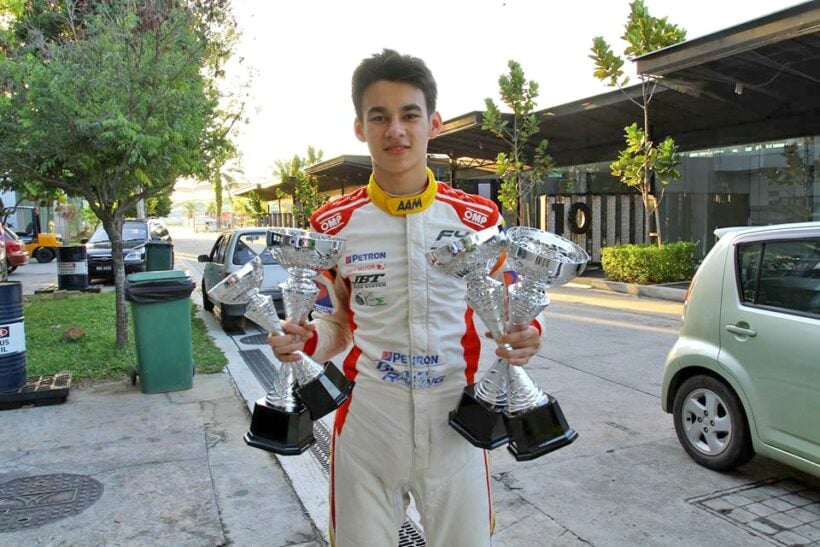 The Meritus Awards Gala (MAG) 2017 is an annual black-tie event to profile and reward racing talent in Asia Pacific. Held in Kuala Lumpur on June 8, the MAG is aimed at promoting Asian motorsports both regionally and internationally, and to bring more awareness to the F4, F3 and F2 in Asia.

Kane Shepherd, Thailand’s rising motorsports star, received the Rookie Overall Champion trophy for first year drivers and the Overall Vice Champion award for his impressive results in the past season where he cemented his potential to become Thailand’s first Formula 1 (F1) driver. Early in the season, he competed in the FIA F4 SEA Championship, with high profile races in Malaysia, the Philippines, Indonesia and Thailand, including Formula 1 (F1) and Asian Le Mans Series events.

Later in 2017, Kane was awarded the “Rising Star” Award by the Royal Automobile Association of Thailand (RAAT). He also won two Asian Championship and six Thai Championship titles, as well as the overall Championship in Formula Gulf.

During this coming season, Kane Shepherd is racing in the inaugural Formula 3 Asian Championships, certified by the governing body Fédération International de l’Automobile (FIA). The championship, which adopts the federation’s new single chassis, single engine concept, is a step up from the successful FIA Formula 4 Series and a great opportunity to further junior motorsports in Asia.

The Sponsorship Experts, Paul Poole (South East Asia) will be managing sponsorship and partnership marketing for Kane Shepherd F3 Asian Championship 2018. We have a number of commercial sponsorship and partnership opportunities available for brands and businesses wanting to integrate with Kane Shepherd and the new F3 Asian Championship 2018, as well as many other opportunities to create bespoke events for your brand or business.

One arrest leads to three other in the ongoing drug crackdown