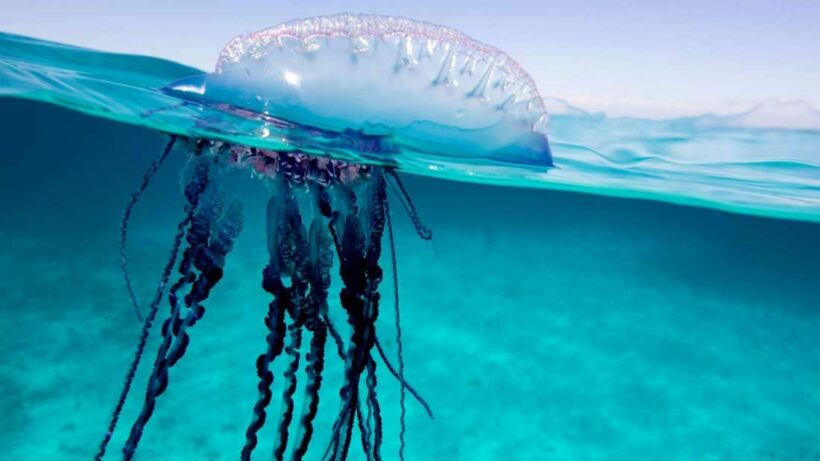 Dozens of signs have been erected, in multiple languages on Cha-Am beach in Petchaburi, warning swimmers about potentially dangerous jellyfish and ‘stingers’.

Manager Online reports that, despite Chinese being frequent visitors to the area, someone forgot to include the warnings in Chinese language.

The sign contained Thai and English, Japanese and Korean. But no Chinese.

Three large signs and some other smaller reminder signs are posted every 50 metres along a five kilometre stretch of th Cha-Am beaches, warning about Bluebottle jellyfish (Portuguese man o’ war).

The signage was erected after a survey was carried out and also includes advice on first aid in the event of stings. If you are stung by a Portuguese man o’ war, here’s the best remedy. It’s unlikely to be fatal but it could result in a nasty sting. 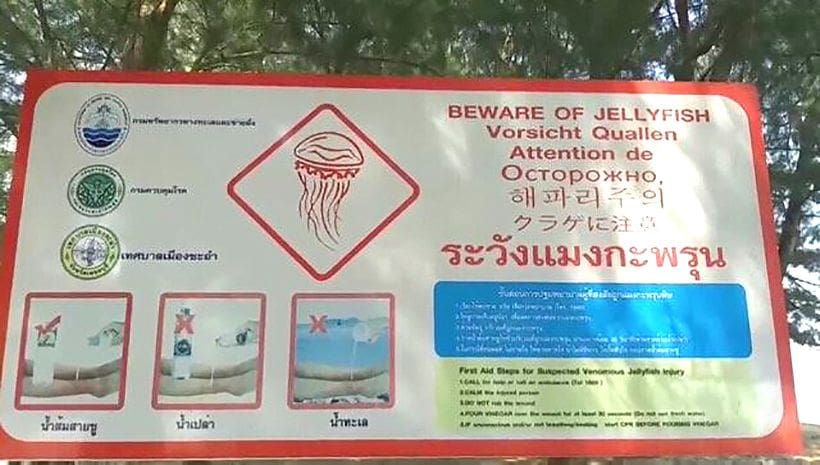 The seaside town of Hua Hin, on the Gulf of Thailand, is working on a proposal to welcome vaccinated foreign tourists from October. Krod Rojanastien, from the Thai Chamber of Commerce, says the Hua Hin Recharge campaign aims to include the resort town in the government’s re-opening plan. He says the area has already earned a reputation for wellness holidays and being a popular seaside destination just a few hours from Bangkok.

According to a Bangkok Post report, the Hua Hin Recharge campaign includes Hua Hin municipality and the district of Nong Kae, an area of around 86 square kilometres, with 182 registered hotels. Adopting similar criteria to the Phuket sandbox model, the campaign is targeting vaccinated foreigners flying into Bangkok’s Suvarnabhumi airport or by private jet to Hua Hin airport. All international visitors would be subject to a Covid-19 test on arrival and would need to download the Thailand Plus tracing app prior to being transported to their hotel.

Krod says tourism operators are hoping to offer tour packages, as well as partnering with their counterparts in places like Phuket and Pattaya, to swap visitors once tourists have completed 7 days in Hua Hin. He says if the re-opening is approved, local operators hope to receive around 100,000 foreign visitors, primarily from countries like China, Japan, Germany, Scandinavia, and the UK. In total, these numbers should result in 1.2 billion baht in revenue.

However, as with elsewhere, everything hinges on the vaccine rollout.

“In order to achieve re-opening, inoculations in Hua Hin must start by June 1 and continue until September 30 with the number of required doses needed being 353,498.”

The Tourism and Sports Ministry has already given the Hua Hin Recharge campaign the go-ahead, on condition that people in areas such as Pran Buri and Cha-am, in the neighbouring province of Phetchaburi, are also vaccinated. The proposal will now go before a meeting of the National Tourism Policy Committee next week, before finally being submitted to the Centre for Covid-19 Situation Administration.

Health officials in the northern province of Chiang Mai and the western province of Prachuap Khiri Khan are on high alert amid a surge in Covid-19 cases. Prachuap Khiri Khan has now reported 334 cases, with infections rising by 141 yesterday. The outbreak is primarily centred around the Hua Hin district, with provincial health official Suriya Khuharat saying most people contracted the virus after attending a concert at the Maya Exclusive Pub on March 30.

Anyone who is concerned they may be infected can receive a free Covid-19 test at either Prachuap Khiri Khan or Hua Hin hospitals. The Bangkok Post reports that, in the last few days, around 500 people a day have visited Hua Hin Hospital for testing.

Hua Hin district and health officials have filed a police complaint against the owners of the Maya Pub, who are accused of violating the emergency decree and disease prevention measures. The March 30 concert is thought to be behind the surge in infections in the seaside district, with over 90% of cases linked to the pub. The chain of transmission is believed to have originated with 1 customer who attended the concert after travelling from Bangkok. The woman is an employee at the Krystal Club in Thong Lor, itself at the centre of a Covid cluster.

Despite the rise in infections, the Department of Disease Control says there are currently no plans for a national lockdown, given that other provinces are not as severely affected. Opas Karnkawinpong from the DDC says the most important thing is for people to work from home and avoid social gatherings until at least the end of April.

“People are asking if there will be a lockdown. I’d say that a lockdown is the last resort if virus transmissions show no signs of letting-up. Activities that draw large crowds pose the greatest risk and should be avoided until the end of this month at least.”