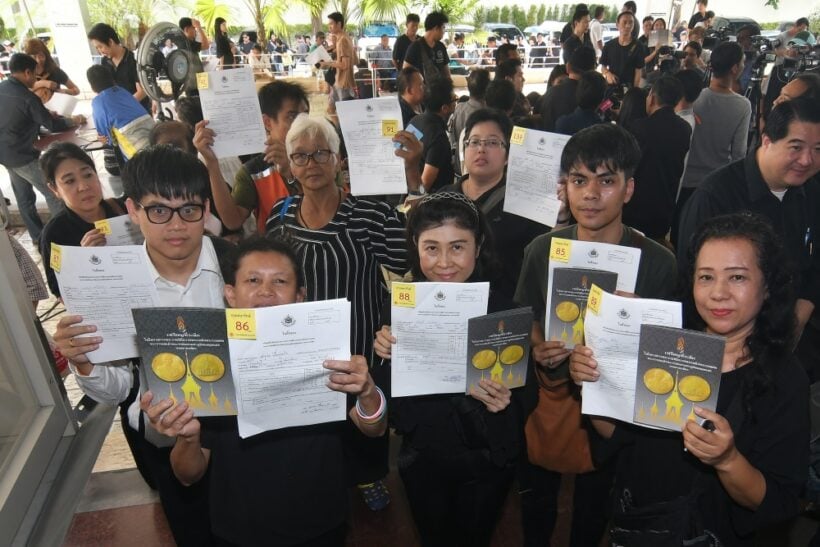 Specially minted coins, commemorating the forthcoming funeral of His Majesty the late King Bhumibol Adulyadej, are causing long queues at locations around the country.

Long queues formed at various designated locations across the country on Tuesday morning as members of the public waited to reserve commemorative coins minted for the funeral of His Majesty the late King Bhumibol Adulyadej. There were large crowds at the Treasury and Government Savings Bank in Bangkok as well as at the local Treasury Museum in Songkhla.

In Nakhon Ratchasima people began lining up at 4am in time for the office opening at 8.30am. According to The Nation, 60 year old Chawan Chokkuakulchai, who travelled from his home in Dan Khun Thot district, had to wait outside the office from 5am and says the coins would have high sentimental value and he would keep them for younger generations of his family.

Nakhon Ratchasima Treasury says each person can buy one gold, two silver, one bronze, and three copper-nickel coins. In the North-east, crowds were queuing at the Khon Kaen Treasury Office.

The specially-minted coins will surely become popular with all Thais and collectors. The 3,000 Bt bronze coin is proving particularly popular. To reserve coins applicants have to present their Thai ID cards at the department head office, any of its 76 branch offices, the Bureau of Monetary Management in Pathum Thani, the Coin Museum on Bangkok’s Chakrabongse Road, or the Treasury Pavilion Museum in Chiang Mai or Songkhla.