Acute self indulgence today as we announce our first major milestone for thethaiger.com.

It was on August 1, 2017 that the fledgling Thaiger company took over the reins of the 23 year old Phuket Gazette and started posting under the new management. Only two weeks before we had received the keys to the toy box and started work on rebuilding the PhuketGazette.net website. HERE is our first article on August 1, 2017. 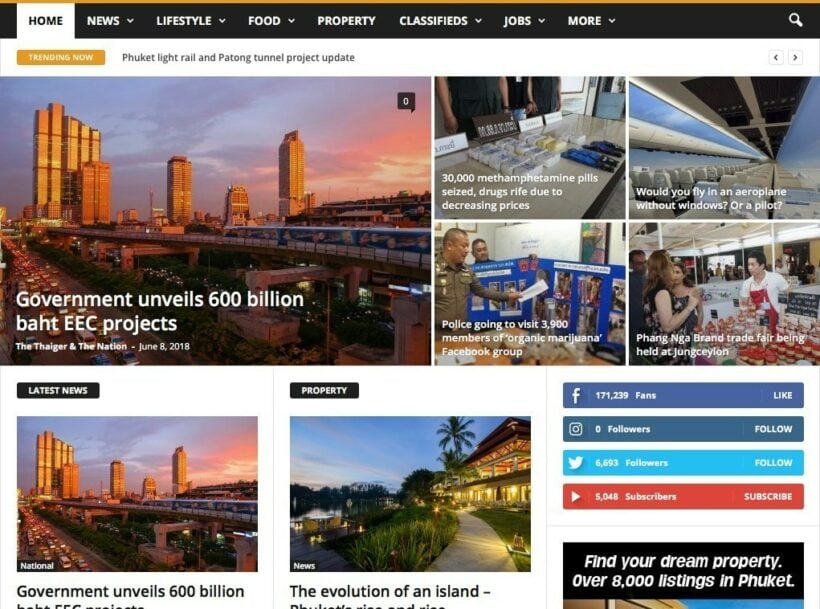 Our first website design when we launched on August 1, 2017

The Thaiger radio station had already been running since October 1, 2016 and had built up a strong following as the new English-speaking radio station in Phuket, in a very short time. In taking over the digital assets of Phuket Gazette, the plan was always to integrate, rebuild and rebrand.

At the time the Phuket Gazette had closed down its formidable local paper after a sterling 23 year old run – the old articles are still retained on The Thaiger website, a 23 year archive of Phuket life. All that was left was the digital side of the business and The Thaiger management could see the long-term website SEO and the high number of followers on its Facebook page as an excellent ‘next step’ for its growing media, radio and digital presence.

But it was in April this year The Thaiger revealed it claws and rebranded the website as TheThaiger.com along with all the other social media sites. The Thaiger was going national and so began the long journey to become a new force in English-speaking news and information in Thailand. Technically, changing over from PhuketGazette.net to TheThaiger.com was a nightmare to roll-out and we took quite a hit on web traffic to begin with – mostly predicted but it certainly hurt for a few months. Four months later we’ve not only clawed back that traffic we’re now up 73% on the traffic we had in the month before the changeover.

We also started our Thai-language news site and that remains an important area of growth for the Thaiger brand.

As we enjoy a slice of our first birthday cake we are proud to announce that we kicked over the 600,000 mark with pageviews for the month of July, well on the way to our target of reaching 1,000,000 monthly pageviews by the end 2018. This follows 20% growth in web traffic during April, 26% growth in May and 19% growth in June – all during the traditional quiet business months on the tropical island.

Along with The Thaiger FM radio, YouTube, three Facebook pages, Instagram and Twitter we’ve more than doubled the ‘reach’ for Phuket’s listeners, readers and viewers in just 12 months. And now we’re taking on the national platform with our free classifieds, jobs and events listings, national property portal and comprehensive local, national and regional news and information.

We’ve made plenty of mistakes but we’ve made a few good decisions too and continue to try new and better ways of improving The Thaiger every single day. Our growing pains are the best pains to have and we’re learning as we continue to roll out new content and services.

For the rest of this year you will continue to see a rise in the number of articles posted – Phuket, national and regional – and better integration with our social media portals. The Thaiger radio will also continue to provide the best local delivered by passionate Phuket people.

The Thaiger will fight a few campaigns and truly appreciate the trust you’ve put in us to provide you with nimble, accurate news.

I would like to thank Noom, GN, Kritsada, Garry, Gerry and ‘Tank’, our current core Thaiger team. Also a very big thanks to Donna, along with Darren, Hayden, Alex, Colin, Jo, Sue, Tiya, Randy, Matty, Kamin, Jay, Dave & Christine. Also our sponsors and advertisers, most who have been with us since Day One as The Thaiger radio – they continue to grow along with The Thaiger.

To Sam for all your annoying grammar corrections, please keep it up.

To Bill for your counsel and guidance.

Our competitors for setting benchmarks we will exceed.

To D’Arcy Quinn and the other trolls that have made us better moderators and social media gurus.

And finally to the astonishing team at DBVentures who are our digital tour-de-force, the reason we look great online, the reason we’re kicking digital ‘arse’ and a great team to work with.

Happy Birthday to all the Thaiger team and everyone who has clicked, listened, watched, read The Thaiger and commented in the past 12 months.

Cue ‘We’ve Only Just Begun’ thanks…