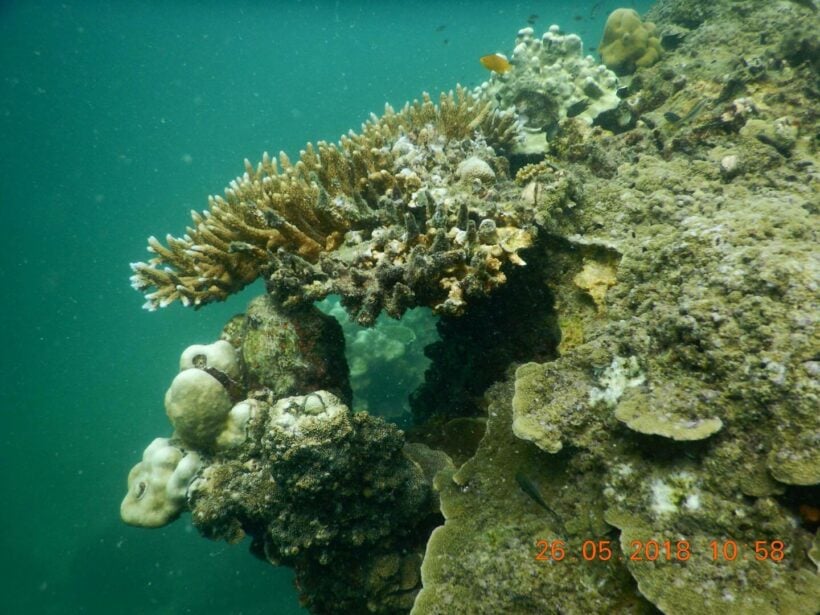 On Monday (May 28) divers from Local Diving Krabi Company posted a video clip of coral bleaching underwater at Koh Ya Wa Sam (Koh Koo) near Separated Sea (Thale Waek) which is one of Thailand’s lesser-known highlights in the Hat Noppharat Thara-Mu Ko Phi Phi National Park.

Dive instructor Parinya Pantajit says, “We found that coral has been ‘bleaching’ since the beginning of this year. Water temperatures has reached 32 degrees Celsius. We think that this is the main reason for the bleaching phenomenon. However we awaiting expert surveillance on the coral in this area.”

Worapoj Lomlim, the Chief of the Hat Nopparat – Mu Ko Phi Phi National Park says, “we haven’t receive any official reports on coral bleaching at Koh Ya Wa Sam. We think that the bleached coral that has been found is the same that we encountered two years ago.”

“Coral bleaching can be caused by an increase of water temperature. However officers will survey to see whether there is any more coral bleaching in the area so that attention can be brought to the new areas and the information added to the national survey.”

Flooding in Thailand’s north and northeast