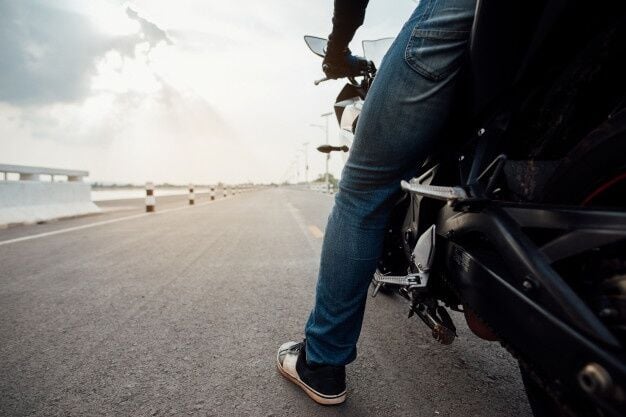 Yesterday, a woman in Chon Buri crashed her motorbike into a parked car in Nong Maidang sub-district. The woman, identified as 33 year old Roongruedee Krairatchimplee, has sustained serious head and face injuries, and was in severe pain. Emergency services rushed Roongruedee to the local hospital. The accident happened on a bypass road. Reports do not say if the motorbike rider was wearing a helmet.

Police are investigating whether it was legal or not for the truck’s driver to have parked where he did. So far, there have been no legal charges. The driver, 41 year old Wichanchai Sukpana, says he orignally planned to have his truck fixed at a garage nearby. He wanted to park his truck in a garage, however no parking spaces were available there. The garage owner then requested he park the truck on the side of the road near the garage before he returned home to wait for the truck to be repaired. The owner later told Wichanchai that the motorbike driver had crashed into his truck.

In 2017, Thailand had the highest rate of deaths from road accidents in the world, according to World Atlas. The average road traffic death rate that year was 36.2 per 100,000 population. This was despite the Thai government’s attempts at reducing road casualties. Malawi and Liberia followed, with African countries making up most of the top 10.

Guest1
1 hour ago, Stonker said: Sorry, that's not correct - the stats are based on death within 28 days of the accident. I posted links elsewhere to the UN / WHO stats for 2019, which were the most recent, but…

Vince
4 hours ago, ThaiEyes said: Sorry to hear the lady sustained severe head and face injuries, but you generally get those if you’re not wearing a helmet. Sure if it’s an open face helmet you could get face injuries, but…

ThaiEyes
1 hour ago, Fanta said: Less likely but the plastic buckets masquerading as helmets in Thailand are skid guards at best, open or full face. There’s a reason quality internationally certified helmets cost 10,000- 20,000 baht and that’s got a lot…

Cabra
You can get your daily dose of "watch this accident" on ThaiRath TV32... it's truly jaw dropping what happens on Thai roadways in the ongoing battle of bike vs. car/truck/heavy equipment

Vince
1 hour ago, Cabra said: You can get your daily dose of "watch this accident" on ThaiRath TV32... it's truly jaw dropping what happens on Thai roadways in the ongoing battle of bike vs. car/truck/heavy equipment Fun! And they wear…