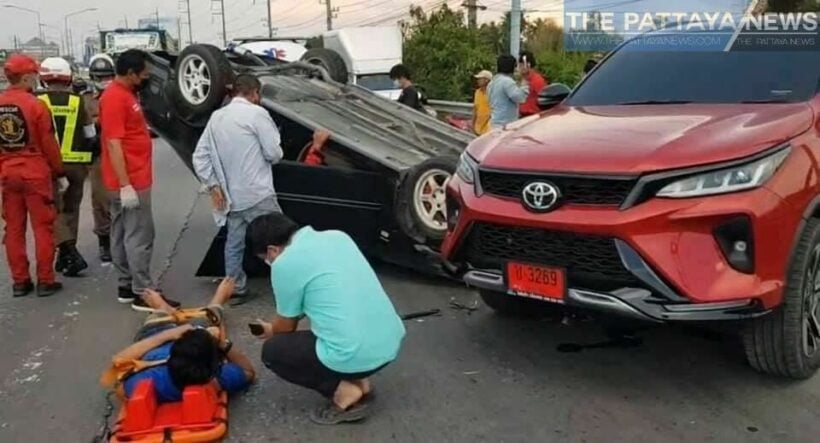 A 35 year old man is in police custody after flipping his car and damaging 3 other vehicles in a major accident in the eastern province of Chon Buri. The Pattaya News reports that the driver, named as Chatchai Thaijiam, was arrested by police and is suspected of driving under the influence of illegal drugs.

Emergency workers called to the scene of the accident in the sub-district of Baan Suan found a black sedan on its roof in the centre of the road. Inside, rescuers found Chatchai, who it’s understood refused to cooperate with first responders. According to the Pattaya News, emergency workers described the driver as acting suspiciously, and that he “appeared to be searching his damaged vehicle for an unknown possession.”

“Mr. Chatchai crashed into the back of a pickup truck at speed, causing me to crash into him and causing a further pile-up.”

Police had to remove Chatchai from his car by force, with officers subsequently finding a small packet which has been confiscated for further investigation. The suspect has denied the packet is his and says the accident was caused by a tyre on his car exploding. However, a subsequent inspection of the vehicle has shown all tyres to be intact. Police have confirmed that Chatchai appeared to be under the influence of drugs and he was taken into custody for drug testing and further interrogation.