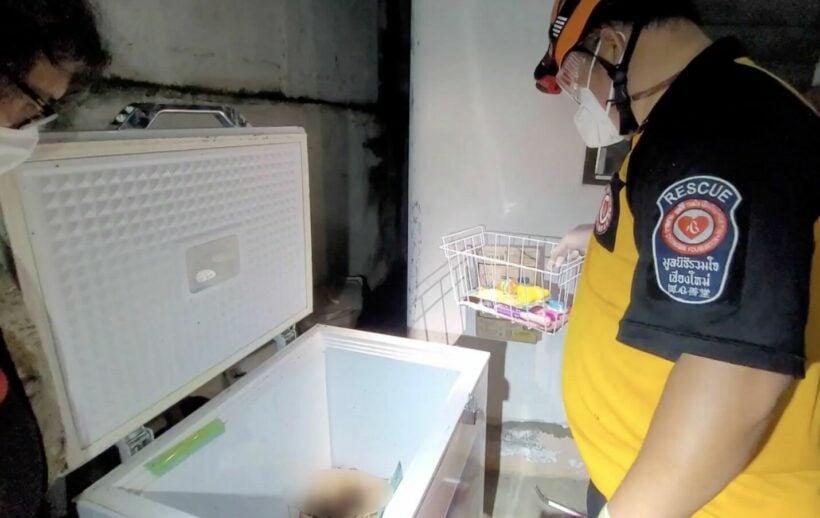 The body of a baby has been found in a freezer at a home in Chiang Mai along with children’s toys. The baby was stillborn and a report from the Bangkok Post says police suspect the father put the body in the freezer more than a year ago.

A man cleaning and renovating his 83 year old mother’s house found the frozen corpse wrapped in a yellow cloth in the freezer. Children’s toys were also found in the freezer. Reports say he later found out the baby was his 24 year old stepson’s child, who was identified in Post as “Uew.” After the girlfriend gave birth to the stillborn, Uew reportedly couldn’t get over the death and decided to put the corpse in the freezer.

Uew and his girlfriend were both convicted of theft. Uew is now in Chiang Mai Central Prison and the girlfriend has since been released. The grandmother says she had moved out of the house and let the couple stay in the home together. Her son recently went to clean the house after being away and found the corpse in the freezer.

Officers from Mae Ping Police Station and a rescue team visited a house in the Mueang district of Chiang Mai. They suspect the baby had died over a year ago. Cabra
Sounds like (hopefully) both these fools are going to get a return trip ticket to the local provincial prison.
Fanta
1 hour ago, frimu said: You're all a bit heartless here. I don't understand, why they put that guy in jail. He needs psychological help, but jail is cheaper, I guess. And he was mourning about the stillborn baby. Sometimes…

Fluke
9 hours ago, Fanta said: I wasn’t justifying anything. Just saying that this is the act of people that were not right in the head. We all know the most common cause of mental illness in Thailand. Drugs or holding…