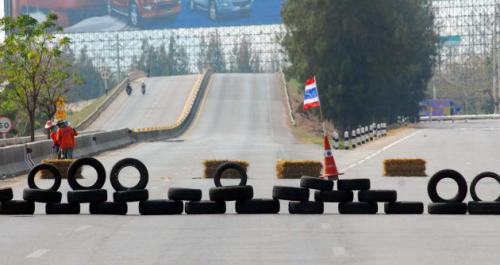 PHUKET: The island’s market for consumer goods and fresh produce has not been affected by the political turmoil in and around Bangkok, the head of the Department of Internal Trade (DIT) Phuket office has assured.

“I’m not aware of any shortages on the island, so there should be no reason why goods in Phuket would be any more expensive than usual,” affirmed Supap Jeenmoung, the DIT Phuket office’s newly-appointed chief.

Mr Supap recently transferred from the DIT’s Trang office to replace former DIT Phuket head, Supatcha Boonpalit, who retired about a month ago.

The new chief denies that Phuket’s supply and stock of goods have been affected by a recent blockade of the primary Southern-bound highway at Wang Manao intersection in Ratchaburi – an hour west of Bangkok.

On February 3 the Phuket Gazette reported (story here) that a blockade of Rama 2 highway (route 35) by disgruntled rice farmers was reported to be causing delays in shipments between the capital and the Southern region.

Mr Supap added that there have been no other incidents or reports to suggest that any other neighboring Southern province has been affected.

“Inspections by [Commerce Ministry] officers of local markets confirm that there have been no shortages or delays in the delivery of goods to/from Phuket or other Southern provinces,” he said.

“Prices are starting to come back to normal now after the Chinese New Year, which saw the price of pork and some fruits slightly increase due to the higher demand (story here) during the festive time.”

Asked about his impressions and thoughts thus far on Phuket’s relatively higher cost of living, Mr Supap said, “Phuket is a prominent tourism destination, so its cost of living is higher. There are various factors to consider. For example, although the national minimum wage was set at 300 baht, the lowest wage being paid to workers at local eateries and restaurants in Phuket is 350 baht.”

Indeed, higher production costs (and transport costs) in Phuket equate to higher costs for the end-users, but that is not to say that cheap food and goods cannot be found on the island.

The chief confirmed that the DIT Phuket office is planning to organize two “Blue Flag” cheap and subsidized goods fairs this month – one in Thalang and the other in Chalong.

The DIT offices in each province, under the authority of the Commerce Ministry, are allocated a budget annually to address inflation and the rising cost of consumerism.

“We’re still waiting to confirm the exact dates with the two newer, big Tesco Lotus branches [in Thalang and Chalong], which are permitting us to use space in front of the supermarkets to hold the fairs.”

“I can’t confirm exactly how much our budget this year is, but I know it’s less than previous years,” he said.

Asked if the goods and produce sold at the fairs would be competing or clashing with those sold inside the supermarkets, Mr Supap assured that this would not be the case.

“There won’t be any duplicating of the goods on offer [with those sold inside],” he said.

Stay tuned for confirmation of the dates of the fairs.

Chief Supap added, “If any unnecessary price gouging is suspected, you can report it by calling the Ministry of Commerce hotline number: 1569.”