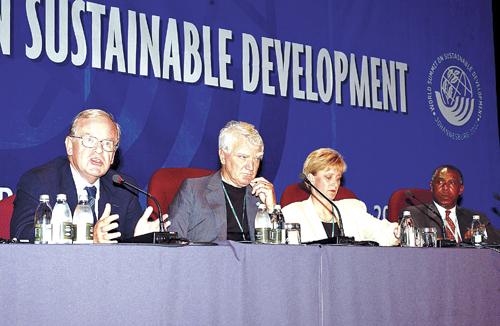 “We live in a world where every 12 seconds, a child dies because of dirty water and insanitation. CO2 continues to build up and forests are depleting. We live in a resource-constrained world. There are limits.” – Peter Bakker.

PHUKET: These chilling words from Peter Bakker at a recent Bangkok symposium held by the World Business Council for Sustainable Development (WBCSD) paint a bleak outlook. But he intended to frighten, in order to draw business leaders’ attention in and push them towards sustainable actions for the planet.

Speaking at the “SCG ASEAN Sustainable Development Symposium”, Bakker identified the need for the business world to revolutionize their practices – given “questionable” progress on goals agreed upon at four global climate conferences since 1970.

The WBCSD is a CEO-led organization comprising 191 members – made up of global corporate leaders, including Siam Cement Group and PTT in Thailand. By the year 2050, the global population will have risen to 9 billion. Under the WBCSD’s “Vision 2050” proposal, policies are being implemented among business leaders to ensure that people can live well, and within the planet’s resources.

The proposal touches on several key areas, which need to be improved in order to achieve sustainability. These areas include energy, power and mobility, among others.

Bakker shared with the over 1,000 attendees at the symposium the notion this vision starts with individual companies. He suggests that some businesses in the same sector could work together towards similar goals.

“We must get all the companies to play. When they are buying vehicles, companies should buy fuel-efficient ones. By working together, you’ll find sustainable solutions… People on this planet must collaborate,” he said.

However, companies alone cannot revolutionize capitalism, he admitted. It will take the collaboration of governments and regulators.

To Bakker, Asia is the hope of the world, given the economic growth pace. Yet, he says
companies in this region should think more about sustainable development and consider “how will they scale up” actions towards that goal.

Since 1970, the world has witnessed a depletion of natural resources. The United Nations stepped in to host the first climate conference in Rio de Janeiro, Brazil, in 1992. Member countries convened again in 2002 in Johannesburg, South Africa. The latest conference took place in Rio earlier this year. In light of man-made and natural disasters induced by higher temperature, some countries, mainly in Europe, have adopted measures to reduce carbon emission (CO2).

In November, the World Bank urged stepped-up efforts to meet world carbon reduction goals after looking at what it says would be “catastrophic consequences” if average world temperatures rose by more than 4 degrees Celsius (7.2 degrees Fahrenheit).

In their new “doomsday scenario”, the World Bank’s study cited a 4 degree increase as the threshold that would likely trigger widespread crop failures and malnutrition and dislocate large numbers of people from land inundated by rising seas.

In Bangkok, Bakker said that when the weather is changing, the economy will be pressured and this could lead to social tensions. The two-day shutdown of the New York Stock Exchange, as super storm Sandy hit the city, served as a crucial reminder.

He noted that businesses know what they need to do, and that they must act now and scale up actions.

They were urged to look for technological solutions and engage employees and the general public for their support. Companies could raise agricultural output through new solutions and use desalination to save water resources and recycle water.

“Under the vision, the sustainable world is the world with a population of 9 billion. All are to live well together within the boundaries of the planet… As the population is growing, we cannot continue to use it (resources) the way we use it now… The effort is not yet large enough to save the planet… The only thing we need to ask now is, ‘how will we scale up?” he said.

There are signs that the business world has recognized its role, he said, noting that over 30,000 business leaders gathered in Rio in 2012.

“I foresee that responsible business will come out and reach out to the world to help,” he said.

Vision 2050: Vital moves towards sustainability
Below are some of the actions business organizations are expected to put in place within the next decade to ensure a steady course towards global sustainability.

– Incorporate the costs of externalities, starting with carbon, ecosystem services and water, into the structure of the marketplace.

– Double agricultural output without increasing the amount of land or water used.

– Half carbon emissions worldwide (based on 2005 levels) by 2050 through a shift to low-carbon energy systems.

Phuket Business: Say it in Chinese