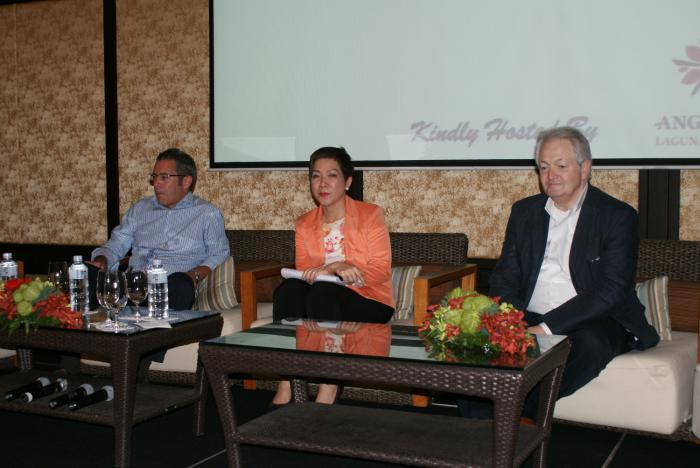 The first keynote speaker was Mrs Supawan Teerarat, vice president of strategic and business development at the Thailand Convention and Exhibition Bureau (TCEB). Mrs Supawan spoke about the overarching campaign led by the government agency to promote Thailand as a global destination of choice for MICE events. She remarked that MICE travellers represented a high-spending, “quality” segment of the tourism industry.

According to TCEB’s figures, the average stay of MICE travellers in Thailand is 5.8 days and the average spent per person, per stay, is a substantial 87,306 baht. Furthermore, TCEB statistics presented by Mrs Supawan indicated that travellers from Asia made up the core of Thailand’s MICE tourism, and that the number of visitors from China and India in particular, has exhibited rapid growth over the last few years. Chinese MICE tourist arrivals have risen from 48,596 in 2011 to a staggering 128,437 in 2013.

Mrs Supawan went on to outline the TCEB strategy and support programs in place to encourage MICE tourism and urged local hotels and businesses to take advantage of the wide range of support on offer which includes: business matching, destination matching, promotion within Asean countries, as well as online marketing and PR support.

“Every year we aim to attract more and more MICE events to Thailand. We [the TCEB] should be the gateway for all your wishlists, you should contact us to help make your events more successful.” she said.

Under the TCEB’s strategy, four key Thai cities have been branded as “MICE Cities”, and highlighted for their various strengths, as a way to direct the segments of MICE tourism into key destinations. The four cities are: Bangkok – “Evolving Metropolis”; Pattaya – “Festive Seaside”; Khon Kean – “Gateway to Greater Mekong and Indo-China”; and Phuket – “Luxurious Incentive Island”.

The following speaker was Welf Ebeling, vice president of APAC – Global Business Travel Association (GBTA), who focused on the potential of his companies vast data resources which can be used to increase international MICE tourism inflows through increased understanding of global business travel market trends.

Mr Ebeling presented research that clearly identifies Asia as the region with the strongest growth in business travel, taking advantage of economic uncertainty in the US and Europe. According to GBTA, forecasts for business travel spending in the Asian region is set to increase from US$361 billion in 2011 to US$624bn in 2016.

The final speaker, Mark Simmons, vice president of sales and marketing, Asia-Pacific, for Outrigger Hotels and Resorts discussed how the island could increase its slice of the lucrative MICE tourism pie. He noted that the value of MICE tourism on the island was estimated at more than $US163 million in 2012. And in 2013, Phuket hosted 788 MICE events attracting almost 80,000 visitors – roughly 75% of them international and the remaining 25% domestic.

Mr Simmons was adamant that the Laguna Group was at the epicenter of the island’s push for “quality over quantity” MICE travellers, as it had the combined resources to host large events and provide the world-class standard of hospitality and service sought by international MICE organizers.

He cited a recent event held by Chinese skincare company Nu Skin, in which over 1000 people were jointly hosted by Laguna Group hotels, as a perfect example of how local co-operation between businesses to garner large MICE events could benefit the economy of the entire island.

“It’s about collaboration, it’s about benefit for the whole destination [of Phuket] if we can get that thousand room piece of business, we are all going to benefit – not just the hotels, but the ground operators, the dive companies, the golf courses. That is why it’s such a quality segment,” concluded Mr Simmons.

Phuket Business: Seminar on economic and investment trends in Phuket this Thursday