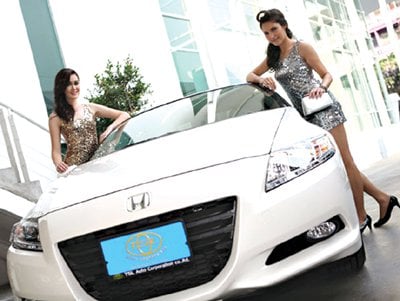 Sureeporn Udompolvanich, CEO of TSL Auto Corporation Co Ltd, revealed that the company was able to sell 800 cars in 2011 with a 15% increase in total revenue when compared to 2010.

“These sales were despite two major natural disasters in 2011 – the tsunami in Japan and flooding in Thailand,” she said.

“Although the sales numbers did not increase, the revenue was raised because we had adjusted our strategies to match situations.

“This is what resulted in the increase in our total revenue.”

In 2012, TSL will keep expending its customer base in the provinces with roadshow displays at shopping centers and community malls.

Marking good reception by consumers the company has invested 30 million baht on its showroom and service center in the province.

Phuket not only has good potential for [improved] infrastructure, but its consumers also have high purchasing power, said Miss Sureeporn.

To support sales, TSL will be launching attractive marketing campaigns and sale promotions throughout the year, including parking lot reservation and discounts at retail shops, restaurants, beauty salons and hospitals.

Damrong Nilrangsee, TSL’s sales director, said that as the tastes of consumers in Phuket are different from those in Bangkok, the models to be distributed should be able to serve their needs. Fundamentally, the ratio of European and Japanese cars for the province is 70:30.

“Based on our consumer behavior surveys, and [the opinions of] our local staffs who understand the tastes of local people well, we aim to sell 10 to 15 cars every month in Phuket,” she said.

With a built up area of about 2,000 sqm, its facilities comprise a showroom, service center and auto paint center.

Its showroom features a variety of luxury cars including the Bentley New Continental GT 2011, Porsche Panamera and Carrera 911, while the service center has a capacity to handle 20 cars per day.

“TSL will keep focusing on building brand awareness among both existing and new customers, as well as offering exclusive services and privileges as to acknowledge the customers’ trust in the company,” Miss Sureeporn said.