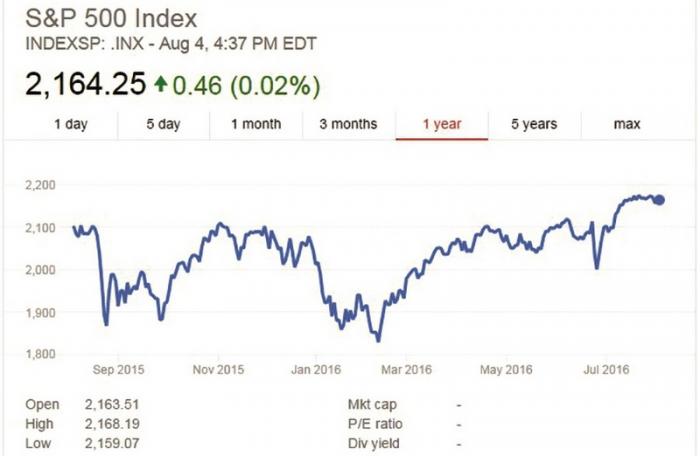 PHUKET: The past one and a half years have been anything but a smooth ride for investors, given that the market’s seen two rapid 10 to 15 per cent pullbacks, and we’ve seen entire sectors (such as biotech, oil, industrials) and so on take some hard knocks.

For investors exposed to unlucky sectors, it’s been difficult to keep pace with the S&P 500’s performance, as bad news or uncertainty (such as plummeting oil prices, European debt crisis, uncertainty in China, Federal Reserve rate hikes, US elections jitters and increasingly deadly terror attacks in western countries) largely overshadow any positive news (such as steady progress in the US economy, a more benign Federal Reserve, market-friendly policies from overseas central banks, oil price stability and a sound bottom formation).

Positive price action of US and global stocks is showing us the bull market is still alive, climbing a wall of worry built by the news media, with no shortage of sectors and leadership stocks emerging on a weekly basis.

However, stock market price action is improving, new leadership stocks appear ready to take off. The struggling S&P 500 Index has once again reached new record highs. On the other hand, the stock market, bonds and gold have spent much of July rallying at the same time. This makes for a confusing mess for investors, as all three are not supposed to be rallying at once, because gold and bonds are considered to be more defensive or safe havens from the riskier stock market.

Here is a quick rundown of the latest price action for the sectors I am watching.

The S&P 500 has broken out of its near two-year consolidation pattern and has had roughly two weeks of new highs (or at least staying above its pre-breakout price level), but we need to remain cautious as another pullback is still possible.

The Dow Jones has also broken to new highs on broad-based buying pressure while the NASDAQ has finally cleared is big January plunge. The NASDAQ’s recent performance is especially important and is due in part to leadership stocks forming in the tech sector, but there are still two previous highs that the index needs to clear.

The SPDR S&P Biotech ETF (NYSEARCA: XBI) was absolutely slaughtered during the last two-year period, but it looks to be finally bottoming. This bodes well for the NASDAQ.

The iShares MSCI Emerging Markets Index ETF (NYSE ARCA: EEM) and iShares FTSE/Xinhua China 25 Index ETF (NYSEARCA: FXI) have bottoming formations on their technical charts that are starting to look pretty solid. Both have also broken out without a pull back – another positive sign.

The Technology SPDR ETF (NYSEARCA:XLK) has been hitting higher highs while the Market Vectors Semiconductor ETF (NYSEARCA: SMH) hit a higher low back in January and also after Brexit, before powering ahead in recent weeks. Semiconductors are leading the US markets higher – very important to see this.

The iShares North American Tech-Software ETF (NYSE-ARCA:IGV) has also broken out and hit an all time high.

The iShares Transportation Average ETF (NYSEAR-CA:IYT) tracks a very economically sensitive sector and could be on the verge of breaking higher. If IYT were to instead rollover and retrace Brexit lows – something that appears unlikely at the moment – that would tell me that a recession could be coming.

There are a number of sectors and individual stocks still fighting to reach their old highs while defensive gold has begun to weaken and pull back a bit. Given that the Dow and S&P 500 have both hit new highs, there is a good chance for most sectors and many individual stocks to follow. Moreover, my 17 years of money management experience tells me that when markets are at new all-time highs with strong price action (like we have been seeing), there are long-term opportunities for investors.

My personal feeling though is that the market is not going to pull back much, but will instead keep rallying, with most sectors hitting all of those old highs again. Any pullback that does manifest will likely be bought, as many institutions are sitting on high cash levels and are missing out on the rally. Stay diversified in the top industry groups, sectors and leading stocks and remain patient.

Don Freeman, BSME, is president of Freeman Capital Management, a Registered Investment Advisor with the US Securities Exchange Commission (SEC), based in Phuket. He has over 15 years experience working with expatriates, specializing in portfolio management, US tax preparation, financial planning and UK pension transfers. Call for a free portfolio review. Don can be reached at 089-970 5795 or email freeman capital@gmail.com.

Business Buzz: Market it right and they will follow

Finance: Hedging your way through Brexit