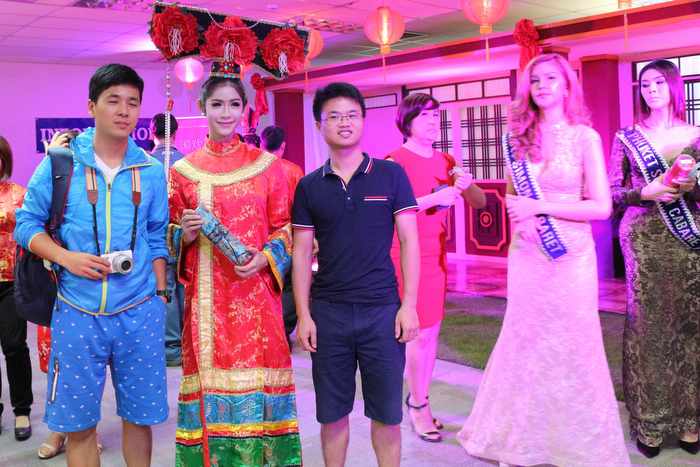 PHUKET: Phuket officials held an impressive welcoming ceremony this weekend for the first wave of Chinese tourists to visit the island under a free, 90-day visa campaign.

The campaign, which will be in effect from August 9 to November 8, was launched in the hopes of recovering from a nationwide 30 per cent decrease in inbound travellers from China and Taipei.

According to 2013 statistics reported by the Airport Immigration Bureau, Thailand had received approximately 900,000 Chinese travellers per month. However, in October of 2013, they noted a 30 per cent decrease.

A recent article in The Nation noted that total international arrivals were down 10 per cent so far this year compared to the same period last year (story here).

Dancers from Simon Caberet and local officials greeted the group of 300 tourists arriving on flights from Pudong and Beijing* with offerings of gift bags with Batik shirts and other souvenirs, welcome signs in Chinese and Chinese-speaking guides on standby to assist them.

“Following the NCPO’s encouragement of a national business campaign waiving visa fees for Chinese tourists, many organizations are happy to participate and we also hope that the number of tourists will increase – especially Chinese – under the NCPO [National Council for Peace and Order] campaign,” said Prathuang Sornkham, director of Phuket International Airport.

“The past conflict in Bangkok is the main factor which affected the tourism industry. I believe this campaign will help increase the number of tourists in Thailand, especially Phuket,” Ms Anoma said.

When asked about the possibility of people taking unfair advantage of the temporary, visa-fee exemption, Mr Prathuang said he was not worried.

“The Immigration Bureau has a policy to control unexpected immigrants who may try to take advantage of this campaign. I don’t believe this will be an issue,” he explained.

*The story originally stated that the passengers had arrived from Hainan.

Don’t stick your head in the sand, start investing