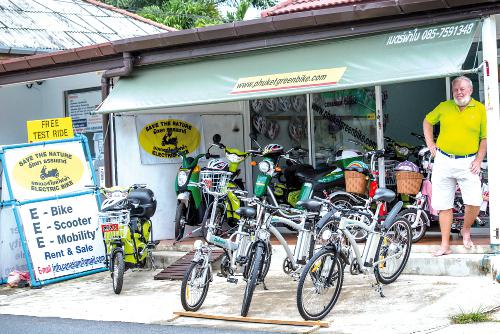 PHUKET: A new transportation option recently made its debut in Phuket. You don’t have to fill it up out of old whiskey bottles on the side of the road or break a sweat pedaling up the island’s steep hills. All you have to do is plug it in before you go to sleep at night.

Electric bikes have undoubtedly been around for quite a while, since the late 1800s in fact. However, an appreciable selection has not been widely available in Phuket, that is until the recent opening of Phuket Green Bike in Nai Harn.

Owner of Phuket Green Bike, Josef Memmel said, “In China there are more motorbikes and scooters on the road than in Thailand but it’s 95% electric.” Inspired by the proliferation of electric bikes in China, Memmel was compelled to promote them here in Phuket where he believes them to be a practical alternative to gasoline powered scooters and motorbikes.

Phuket Green Bike is currently stocking seven different models of electric bikes including a more conventional looking hybrid bike and a smaller scooter-like bike that could be marketed towards the “Hello Kitty” contingent. “The big difference is weight, the lithium batteries are much less weight [than lead-acid]”, says Memmel.

Battery choice is an important consideration as lead-acid batteries are generally heavier, cheaper and have a shorter usable life compared to lithium ion batteries.

The cost of the bicycles themselves is fairly affordable but because they are categorized as a motorized vehicle rather than a bicycle by Thai customs, they are subject to higher import tariffs – a matter which Memmel is attempting to tend to. The more inexpensive versions start at 24,000 baht which is less than most gasoline scooters.

Caring for the bikes is easy says Memmel,”The only maintenance you need is tyres, brakes and lights. There is no gear box, no motor and no chain drive.” The life of the batteries is finite but they do come with a warranty; details of which are outlined on the Phuket Green Bike website (see below).

For those interested in a more conventional size and design like a gasoline scooter, Phuket Green Bike will soon have one in stock. Looking very much like a Honda PCX and sharing a similar price tag, Memmel reports that, “It has the ability to go 100km per hour and you can go 100 to 120km before recharging… It will take five to six hours to recharge.”

Electric vehicles are known for their smooth operation with little vibration which is definitely a plus. However, the silent operation of a scooter can be seen from two standpoints: one being the “loud pipes save lives” philosophy, and the other embracing the sounds of nature and the rushing wind.

Another distinct advantage of electric vehicles is the absence of on-the-road emissions. Large power-plants are far more efficient than small vehicles at producing energy and centralizing the point of pollution rather than spewing it throughout cities and towns.

Phuket Green Bikes offers up the option of buying or renting and discounts are given to long-term rentals.

To learn more about electric bikes visit phuketgreenbike.webs.com or call 091 647-6216

A beacon of light: Lighthouse Restaurant on Chalong Bay