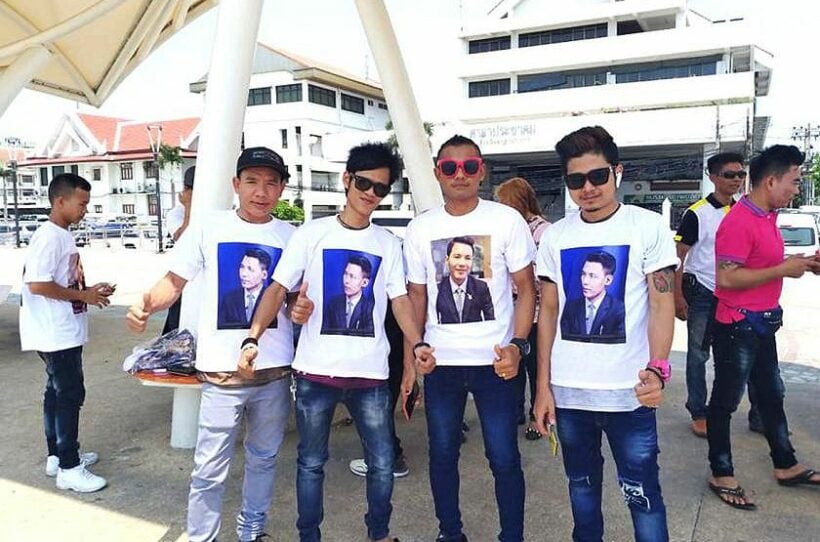 PHOTO: Facebook/Ye Min- Migrants workers wearing T-shirts with the image of Ye Min wait for his release in front of the court in Samut Prakan, Thailand

A prominent Burmese migrant activist Ko Ye Min, one of founders of the Aid Alliance Committee in Thailand, has been released from jail pending deportation by a Thai court.

“Ko Ye Min was freed from jail,” U Khaing Gyi, director of the AAC, said on his Facebook page.

AAC officials declined to comment when contacted, saying the organisation will only issue statements about Ko Ye Min on its Facebook page.

U Khaing Gyi recently told Myanmar media that Ko Ye Min was sentenced to four months in jail and fined 30,000 baht (US$950) for defamation over a comment he posted on Facebook about a Thai employment agency.

He was released after spending about five months in jail, and the Thai court banned him from engaging in migrant-rights activities for one year.

He has been transferred to the immigration detention centre pending deportation back to Myanmar, according to a news report.

Ko Ye Min was arrested last October 19, when he went to the Thai immigration department to extend his visa. After his arrest, he was slapped with several charges, including defamation and for overstaying his visa. He had been detained at Samut Prakan prison, south of Bangkok, since October last year.

The AAC was formed in 2014 by U Khaing Gyi, Ko Ye Min and Ko Naing to protect Burmese migrant workers in Thailand.

The group has faced pressure from labour brokers, employment agencies and employers in Thailand for championing the rights of migrant workers.