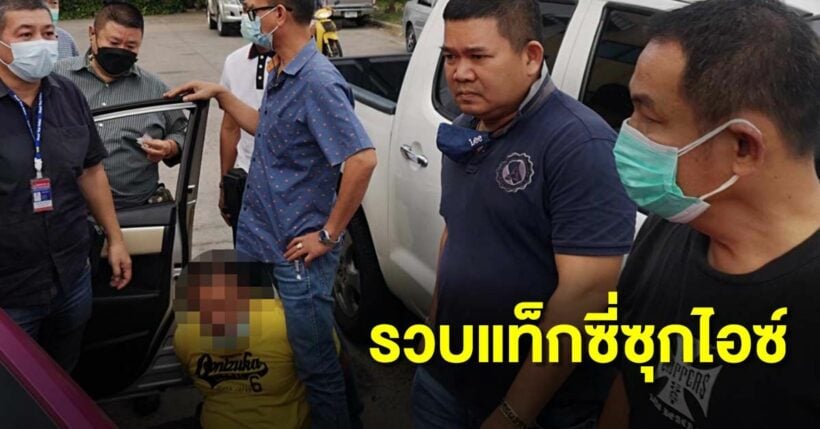 Yesterday, police had a car chase with a taxi driver who also allegedly worked a second job as a drug dealer in the Bang Khen area of Bangkok. He was arrested in an alley after smashing into a police car, then 10 more cars.

44 year old Narong or “Neung” Kaewkamnert, was arrested by police after they mounted a stakeout. The police abandoned the stakeout when they saw a pink taxi acting suspiciously. Narong then drove off in his ill-fated escape attempt, smashing into a total of 11 cars, including a pickup truck that ended his brief evasion of the police.

When police arrested Narong, they allegedly found 2.10 grams of crystal meth in his pants.

Narong allegedly told police he just got out of jail for selling drugs. Reportedly, he also said he wanted to rent a taxi, but couldn’t make enough money to support himself. This is when he met with a dealer he calls “Mai”, who then fronted him drugs to deliver to an expecting client in Soi 48.

He allegedly also told police that when he saw them he decided to flee rather than get arrested.

Police have taken him to the Bang Khen police station. They are also trying to find all the owners of the cars he struck in his escape attempt.