Police have closed all shops selling cannabis on Khao San Road in Bangkok for operating without a license on a public road. The police told the businesses that selling cannabis wasn’t wrong, but it is illegal without permission to do so.

Since cannabis was decriminalised on June 9 and removed from the Public Health Ministry’s narcotics category, cannabis shops have sprouted up on almost every corner of the city.

Recently, a video showing a conversation between a cannabis seller and a customer on Khao San Road went viral. The video features a seller rolling a cannabis joint for a customer on the pavement.

The customer said, “This is the only thing making me like this government. They free up cannabis for us very easily.”

Thai netizens were outraged by the video, saying the shop is subverting the rules and using it for recreational purposes and personal pleasure, and not for medical reasons. Others added that the government should launch measures to control shops like this.

The Superintendent of the Metropolitan Police Division 1, and Acting Superintendent of Chana Songkram Police Station, Thanadon Hemaphat, yesterday investigated the cannabis shops on Khao San Road. He spoke to a 36 year old cannabis seller, Wattawee Thaweewat, who was preparing to open his shop on the pavement. The seller didn’t have a license so he was told to close until he got permission first.

Some netizens believe there should be stricter measures in place to control shops flouting the rules before something negative happens.

The Chief of Cannabis and Hemp Act, and Bhumjaithai Party MP, Supachai Jaisamut, explained to the media that the restrictions and measures were still under the commission’s consideration. The commission aimed to complete all steps before the end of July and submit them to parliament in August.

Supachai admitted that the laws to control cannabis hadn’t finished yet. The Bhumjaithai Party MP insisted that the authorities could handle it, and the police from Chana Songkram Police Station would closely monitor cannabis businesses on Khao San Road.

He added he would like all sellers and business owners to stop selling cannabis too blatantly during this time. 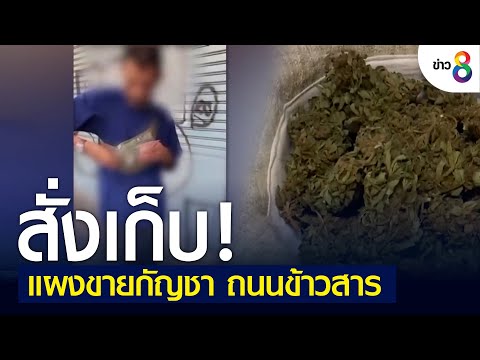