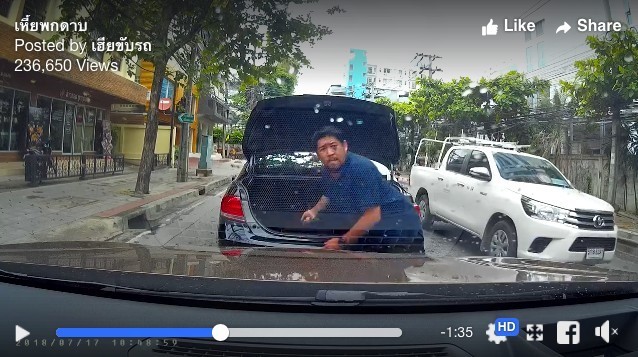 The South Bangkok district court has handed down a sentence today on a male driver. He’s been sentenced to 2 months and 15 days behind bars.

The sentence follows the man’s indiscretion caught on a dash cam (video and story below), threatening a female driver with a knife on July 18, after he drove against the traffic to cut in front of her car.

Read the original story and watch the video HERE.

42 year old Sitthiporn Suayngarm was arraigned in court by officers from the Thung Mahamek Police Station this morning (Saturday) and the court swiftly handed down the sentence after the defendant pleaded guilty. The video clip was used in evidence.

The court declined to suspend the jail term despite Sitthiporn pleading guilty, as the court regarded his act as a serious crime. Sitthiporn turned himself in to police on Friday and issued an apology to the woman, saying he was in a bad mood after quarrelling with his girlfriend.

The man was slapped with five charges: damaging another person’s asset, intimidating another person, carrying a knife in a public place without licence, parking car in a prohibited area and changing lane unlawfully.

The crime took place on Tuesday morning at an intersection on Suan Plue Road in Bangkok’s Sathon district near the Bangkok Technical College and was recorded by the dashboard camera of the 64 year old woman.

The clip from the dashboard went viral and had more than a 1 million views. The clip shows a man at the wheel of a black Toyota Camry repeatedly trying to cut in front of a car whose dashboard cam recorded the incident, by driving against the traffic. The man finally managed to complete the illegal overtaking manoeuvre after they drove through an intersection. He then stopped his car, exited, opened the trunk and pulled out a long knife.

The dashboard video showed him walking towards the woman’s car before he disappeared from the clip.

Teacher hangs herself ‘to atone for sins of previous life’