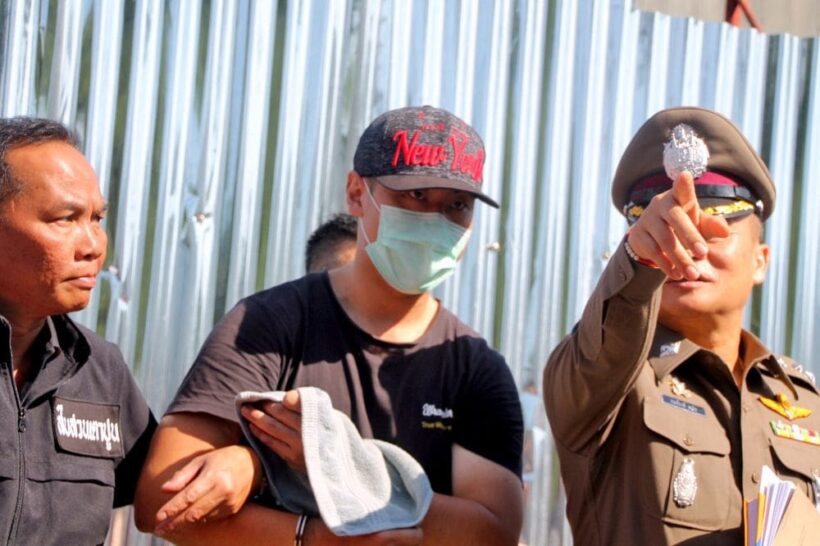 The prime suspect in the murder of a young mathematics tutor has told Bangkok police that he killed his victim out of jealousy and anger.

Metropolitan Police say he reportedly met with the victim, 27 year old Natthawat Piansakul, who was dating his former girlfriend, to tell him to “stay away from the woman” but claimed he was “rebuffed rudely.”

30 year old Surasit Chanwongsakul was brought to perform a crime re-enactment this morning and told the media he would like to apologise to the victim’s mother for killing her son.

Surasit was arrested at 4am on Sunday just hours after the body of Natthawat was found with a single gunshot to the head under a broken-down taxi Surasit had purchased and parked on Soi Prachacheun 4 in Bang Sue district.

He has been charged with premeditated murder, having a gun and ammunition in his possession without permission, carrying the weapon to a public place without a sound reason, firing the gun in public place and hiding a dead body to conceal the cause of death.

Sursait and Sasikan broke up with him more than a month ago.

The suspect allegedly lured the tutor to a meeting in the parking lot of a mall on November 8. An argument broke out inside Surasit’s car and he shot Natthawat when he tried to get out of vehicle.

Surasit, who claimed to carry a gun on a regular basis, insisted he acted on impulse, although he admitted to having told Sasikan that whoever she became involved with next must be careful but said this was an empty threat.

Police say Surasit hid the body under the taxi, as he planned to move the body elsewhere in another car late Saturday evening, but a construction worker noticed the corpse and alerted police.

The suspect is appearing in court this afternoon. Police plan to oppose bail due to the violent nature of the crime.