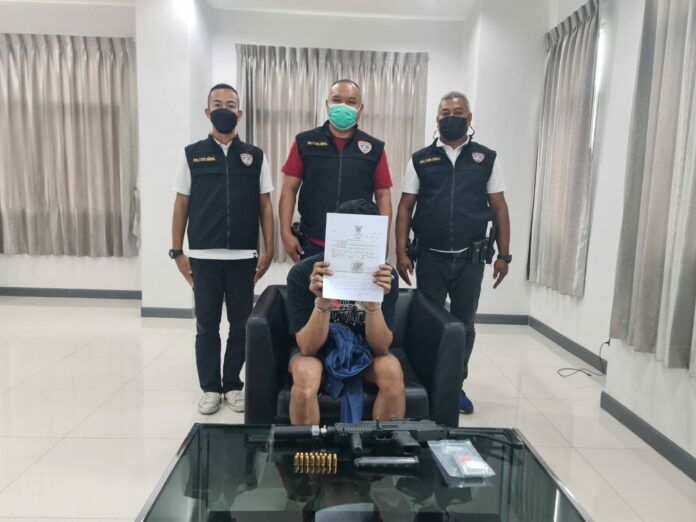 Drug suspect arrested in Nonthaburi, photo by The Pattaya News.

An alleged drug dealer who escaped arrest in the southern town of Chumpon was arrested yesterday in Nonthaburi, near Bangkok. Police say the suspect, 41 year old Wuttichai Yindee, was charged for illegal drugs by the Sawi Police Station in Chumphon. Officials from Thailand’s Consumer Protection Police Division requested an arrest warrant when they learned Wuttichai was in Nonthaburi.

After tracking him down, police caught the theif in Bua Thong district. He has now been taken to the police station for the next legal steps. Police found roughly 53 amphetamines, 0.9 grammes of crystal methamphetamine, digital scales, and a rifle at the suspect’s residence. The rifle had 17 rounds of ammunition.

In the past six months, Thai police have arrested more than 120,000 drug suspects, seized more than 2.4 billion baht in assets and confiscated more than 260 million pills of illegal substances like methamphetamine, aka “speed”. Besides speed, the most common drug was marijuana, with some 53,000 kilograms confiscated. Next was crystal meth (ice), with more than 7,552 kilograms found, followed by quantities of heroin and ketamine.

Pattaya has seen some big drug busts in the past month, after Pattaya police cracked down on people dealing the drug cocktail ‘happy water‘ last month. They also busted 16 people at an alleged ‘Ketamine’ party, including Thai, Burmese, and Chinese nationals.

Fanta
23 minutes ago, Thaiger said: In the past six months, Thai police have arrested more than 120,000 drug suspects That will fill the prisons back up again. The recent flood of amnesties (sentence commutations) over the last 4 years were apparently given to…

Jealous husband shoots wife, then turns gun on himself in Nakhon Ratchasima