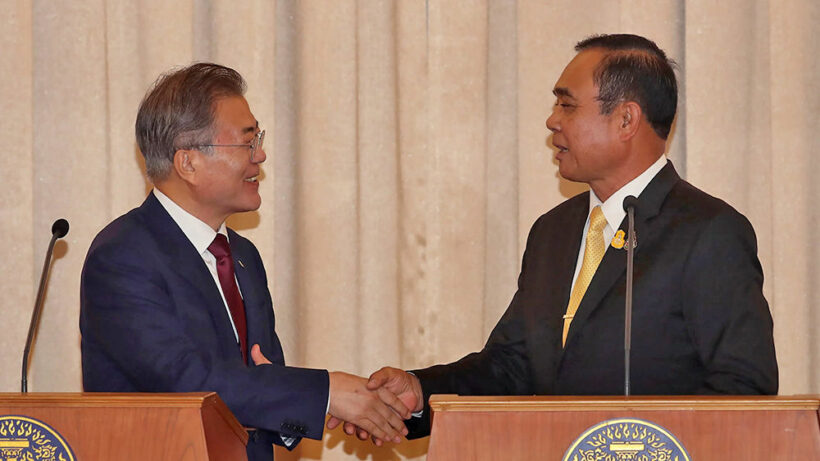 Thai PM Prayut Chan-o-cha is inviting South Korean investors to increase their investment and trade with Thailand. The PM says Cabinet will consider offering incentives for South Korean businesses to invest in the country. South Korean President Moon Jae-in capped off an official two day visit to the Kingdom yesterday.

The Thailand-Korea Business Forum was held yesterday in Bangkok with President Moon in attendance along with economic teams from Thailand and South Korea and representatives of 500 private companies.

Speaking at the forum the Thai PM spoke about Thailand 4.0 – the transformation of the country’s economic structure from an agriculture-based economy into a value or digital-based economy. Also about the Eastern Economic Corridor (EEC) project that was attracting investment from around the world.

According to the Bangkok Post, 400 South Korean companies have invested in Thailand with the trade value between Thailand and South Korea of USD 14-15 billion (428-459 billion baht).

Prayut also spoke about how Thailand could continue to learn from South Korea as they had been able to turn their country from agricultural economy into a manufacturing superpower over a number of decades.

Speaking at the forum President Moon said Thailand is one of the most important trading partners for his government’s New Southern Policy which has been successful in broadening partnerships with south east Asian nations and India. President Moon mentioned specific industries where he saw greater economic partnerships and trade in the future – automation, smart automotive technologies, energy, digital technology – that would assist Thailand to achieve its 4.0 goals.