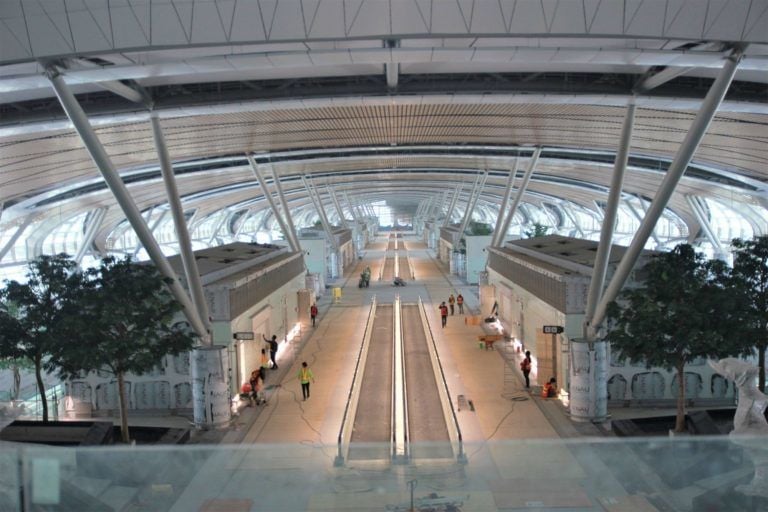 A new terminal extension at Bangkok’s Suvarnabhumi Airport is finishing up after construction was delayed due to the Covid-19 pandemic. The addition would not only reduce overcrowding, but also increase the amount of passengers at the airport. The Satellite Terminal 1, or SAT-1, extension is 95% done and expected to be open to the public by April 2021, according to the Airports of Thailand, or AOT, president Nitinai Sirismatthakarn.

The new extension will have 28 parking bays, reducing congestion and allowing more flights to and from the airport. It’s expect to increase the airport’s capacity by 15 million passengers per year. An Automated People Mover, an electric train system, is planned to transport 6,000 people per hour using an underground tunnel connecting to the main terminal which is about a kilometre away.

The pandemic significantly slowed down construction on the new extension, which is part of a 62 billion baht project approved in 2011. Manufacturers overseas were unable to ship parts due to restrictions and some people needed for the project could not enter the country, Nitinai says.

“Due to lockdown measures, we also had to wait longer for experts from overseas who have to arrive to conduct test runs and provide instructions on system operation and maintenance.”

“The building itself is now 100% complete, with only some interior design and landscape work now being finalised … AOT is also working on the APM system, whose installation in the Satellite 1 Building is now over 70% complete.”

The SAT-1 won’t be fully completed until April 2022. Nitinai says the individual carrier system and luggage carousels are 75% complete.