The infamous, and much-discussed, Patong Tunnel, and accompanying link roads, has been a slow-burn story over the past two decades, popping up with a new twist each year. Each time there is another round of studies, negotiations, plans and maps released to the media… then nothing.

This latest proposal would mean that the new highway, and access to the Patong Hill tunnel, would be tolled. The route is also a variation from the proposal in the past.

The Director of Expressway Authority of Thailand, or EXAT, says he will visit Phuket to follow up with the progress on the Kathu-Patong highway, a 4 kilometre long highway with a budget of 14 billion baht. He will also meet and talk to locals about the process to expropriate lands for the project in order to make the least impact on them.

The project is now waiting for the approval from the government committee overseeing public/private partnership funding for the project.

After the PPP’s approval, the papers will be filed to cabinet for final budget approval. Meanwhile, the EXAT is issuing a royal decree zoning the land planned for expropriation in Patong and Kathu. They’ve already sent officials from the land office to discuss with the local authorities to use the public land and try to avoid private land as much as possible.

The local authorities are being largely positive as the highway will provide a lot of benefits to Phuket, taking a lot of traffic from side roads and linking two of the busiest areas in the island.

Some areas fall under national park zoning and officials are discussing with the forestry department about taking over a small portion of this land to avoid disturbing local communities along the proposed route. The route would take the traffic in a different direction than the current route across Patong Hill and along Phra Phuket Kaen Road, instead going through the mountain south of the current Patong Hill Road and through current forest areas to relink with the By-Pass Road.

Local land agreements will be made soon before filing to the Ministry of Transport, then to the cabinet.

Phuket People’s Voice reports that the current schedule is to start building the highway next year, to be ready in 2021. But proposed start dates have come and gone many times in the past.

The project’s starting point connects with Phra Metta Road in Patong, passes over Pisit Koranee Road, all the way to the mountain (Patong Hill) for 0.9 km, then there is a tunnel (the tunnel!!!!!) through the mountain for 1.85 kilometres followed by a highway for 1.23 kilometres, that finishes in Kathu connecting with highway route 4029.

There will be 6 lanes, 3 lanes on each side. The left lane will be constructed as social motorcycle lane. This is the initiative from local authorities to allow motorcyclists on the highway to solve traffic problem and reduce accidents on the current route 4029 which connects Phuket town, Kathu and Patong.

This highway is also expected to be an evacuation route in case of urgent evacuations.

The construction of a tunnel between Patong and Kathu has been a talking point for two decades. 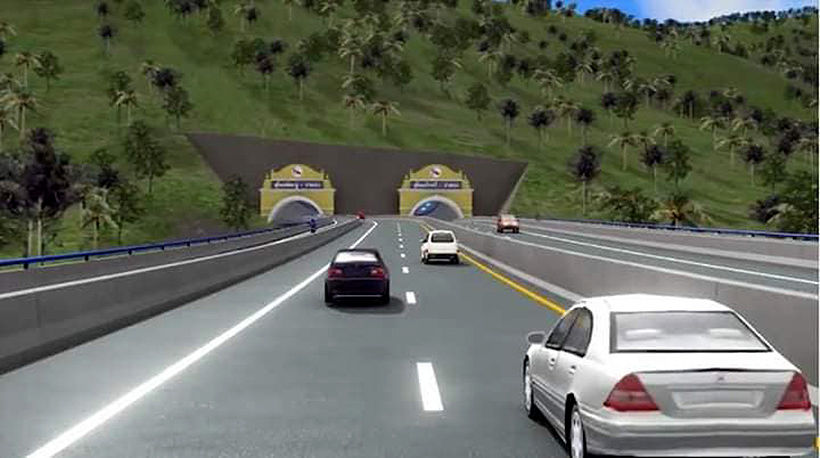