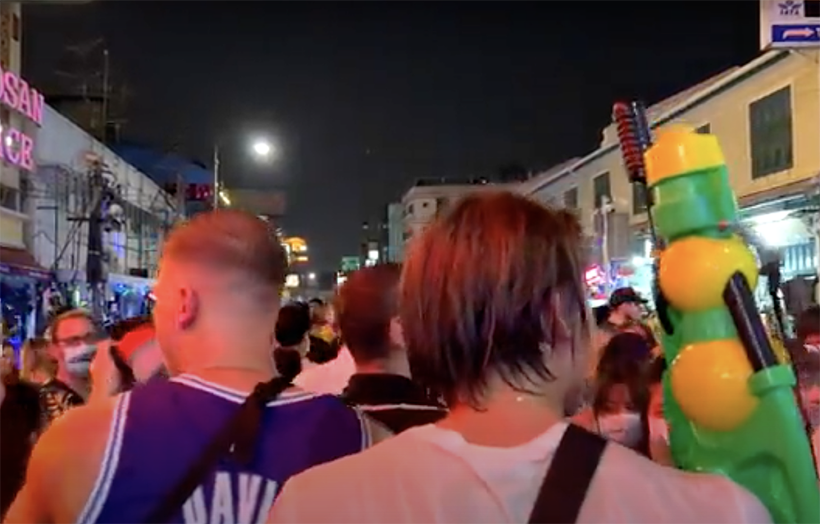 Call in the troops! That’s been the response from Thailand’s government after reports of foreign tourists (you get bet there were plenty of locals in there as well) engaging in “dangerous water splashing behaviour” spread like wildfire on social media at the start of the Songkran festival, well Songkran eve to be precise. Bangkok authorities deployed the military, in addition to police and city officials, to enforce the nation’s water-splashing ban at Khao San Road for both Songkran day and today.

In a bid to reduce the risk of new Covid-19 infections during the Thai New Year, the CCSA announced the water-splashing ban last month. But it appears that many foreigners, as well as plenty of locals, didn’t get the memo about the ban. Videos posted online show revellers — either ignorant or defiant — tossing water on each other on Bangkok’s popular tourist walking street last night.

Now at both ends of the road, barriers have already been erected to screen visitors for prohibited water splashing paraphernalia ie. water pistols (horror!). Security checks began at 1pm to confiscate any squirt guns and an ATK test will be given to anyone with feverish symptoms. Meanwhile, eight local businesses have been fined for selling alcohol after 11pm on Wednesday.

Tourist police have also been deployed to make sure unruly foreigners know the law — and abide by it. The secretary-general of the National Security Council has weighed in on the situation, saying Khao San Road is a public venue where water splashing is prohibited.

But don’t fret, you can still enjoy a virtual water fight in the so-called “metaverse” on Facebook or Instagram.

The worst case scenario, in Khao San Road, Bangla Road in Phuket or Chaweng on Koh Samui, all host for various degrees of water fights over the past few days, would have been police or soldiers actually arresting people for their ‘violations’. It would have been a very poor ‘optic’ for Thailand, arresting tourists, at the time it’s trying to open up and attract the world’s travellers, many of whom see Thailand as a ‘fun’ holiday.

Click HERE to watch some of the Songkran fun on Bangla Road in Phuket last night.

Photo by The Standard.

PapayaBokBok
On 4/17/2022 at 12:06 PM, HolyCowCm said: I knew someone would appreciate that from a long distant memory, and for some reason I thought that person would be you! You can toss me in that group as well. from Mr…