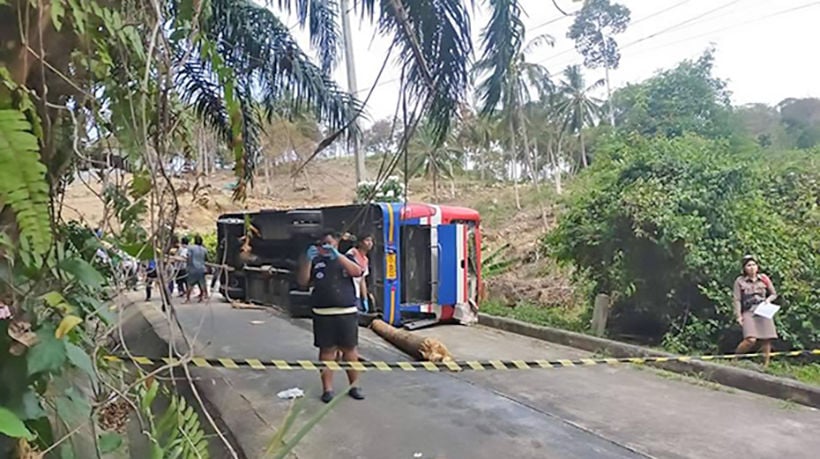 PHOTO: Two people have been killed and 18 more inured in a bus crash today in the southern province of Nakhon Si Thammarat - Bangkok Post

Two people have been killed and 18 more inured in a bus crash today in the southern province of Nakhon Si Thammarat. Police say the bus overturned after sliding backward while ascending a steep hill in Khanom district, killing two passengers and injuring 18. The incident occurred at about 11:30am while the bus was transporting tourists back to Songkhla province after a trip to Surat Thani.

The bus driver, 47 year old Phankhom Tulathon, told police that while passing through Khanom district, the northernmost district of Nakhon Si Thammarat, passengers asked him to drive up a hill called Noen Thewada, a famous tourist spot, for sightseeing.

Phankhom says that while climbing the slope, he found the bus was not powerful enough. Although he shifted to a lower gear, the bus began sliding backward, and quickly gathered speed. The bus veered off the road, hit a tree, overturned, and ended up on its side.

Eighteen other passengers were injured, three of them seriously, and were rushed to nearby hospitals.

Police are questioning the bus driver to determine the exact cause of the incident.