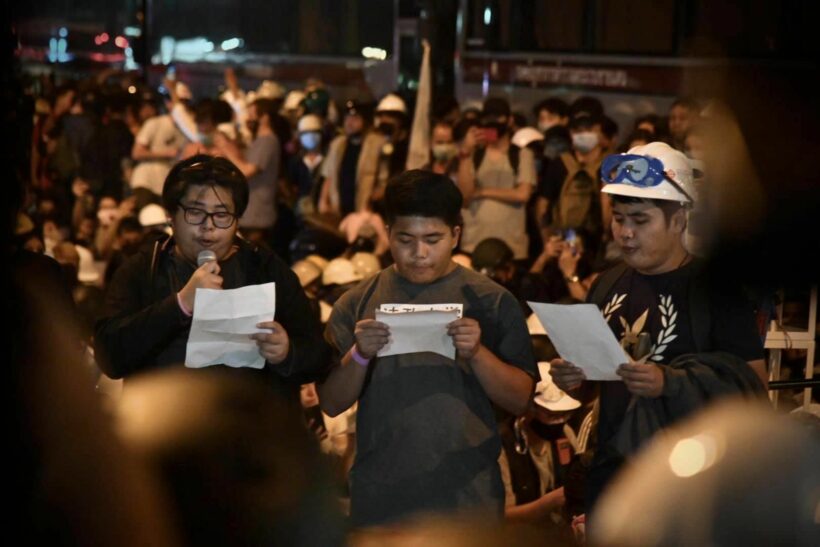 Protesting students last night submitted a letter to the German Embassy, to be passed on to the German Government. The protest started around 4pm when the rally gathered at the Sam Yan intersection, near the Chulalongkorn University, and made its way along Rama IV Road to the German Embassy in Sathorn Road, some 1.5 kilometres.

After some 10,000+ students descended on the Embassy compound in Sathorn Road, the German embassy said it would be “ready to receive the petition and convey it to Berlin on condition it was conveyed in a peaceful manner”. 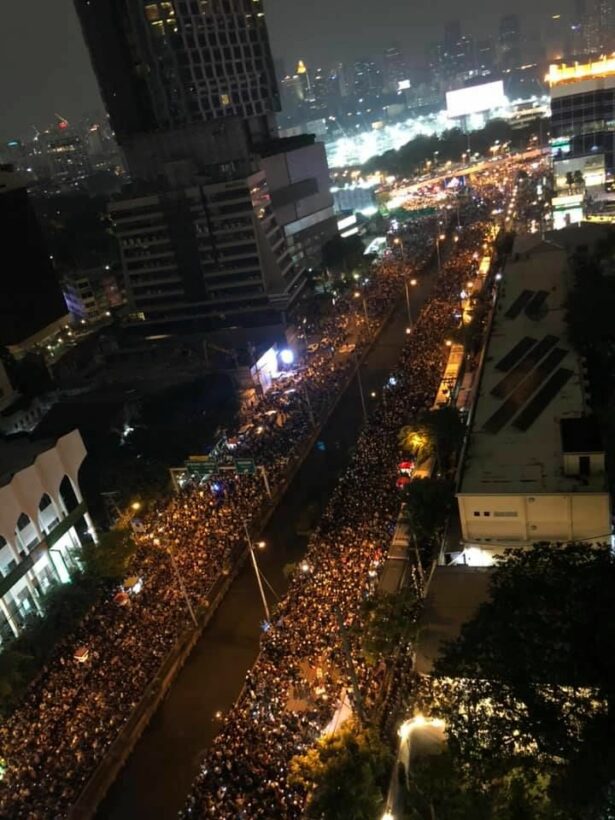 The rally disbanded peacefully at around 9pm after the letter was handed over, in 3 languages, on Khana Ratsadon letterhead. Here is is verbatim, dated October 26, 2020…

On behalf of the association “Khana Ratsadon international, comprised of Thai students and professionals from multiple countries around the world, we would like to urge your excellency to advise the German Government against allowing any further residency of H.M. King Maha Vajiralongkorn in Germany.

During the last few days, we believe that Your Excellency have had the occasion to observe numerous alarming human rights violations in The Kingdom, including the excessive use of force against peaceful protestors and the suppression of free speech.

The protestors. at the receiving end of these egregious violations, were advocating for nothing more than democracy and accountability from the Government.

One of the most significant and courageous demands from the protestors is the accountability of the monarchy as an institution under the constitution. Although punishable by the draconian section 112 of the Criminal Code, the protestors have stood behind this demand, bravely exposing themselves to the arbitrary prosecutions from the palace.

In this regard, we are certain that Your Excellency is well aware of the open secret that H.M. does not habitually reside in Thailand, but rather in Bavaria, Germany. H.M. has conducted Thai state affairs, as well as ordering forced disappearances of oppositions from German soil. Khana Ratsadon International profoundly believes that this violates International custom, law, as well as Article I of the German Grundgese.

As a result, we started an online petition calling for the German Government to declare Maha Vajiralongkorn a persona non grata, which received over 210,000 signatures as of 26 October. An official petition to the Bundestag was also submitted on the 17th of October for consideration. We sincerely hope that Your Excellency would convey our grievances to thc German Government, and advocate for a stronger relationship once meaningful reforms are implemented in Thailand.

Yesterday’s Germany’s Foreign Minister responded directly to the situation out side the German Embassy in the German parliament….

“Of course we are following developments taking place in Thailand, and know there are demonstrations and people taking to the streets for their rights. And, of course, I am also watching what the Thai King gets up to in Germany.”

“We’ve been keeping an eye on that, not only in the past few weeks. But we’re continuously checking and if there are things that we find to be illegal then there will be immediate consequences.”

Earlier yesterday a group of some 500 supporters of the government and royalists dressed in yellow shirts also demonstrated outside the gates of the German Embassy voicing their support for His Majesty and a continuation of the current system.