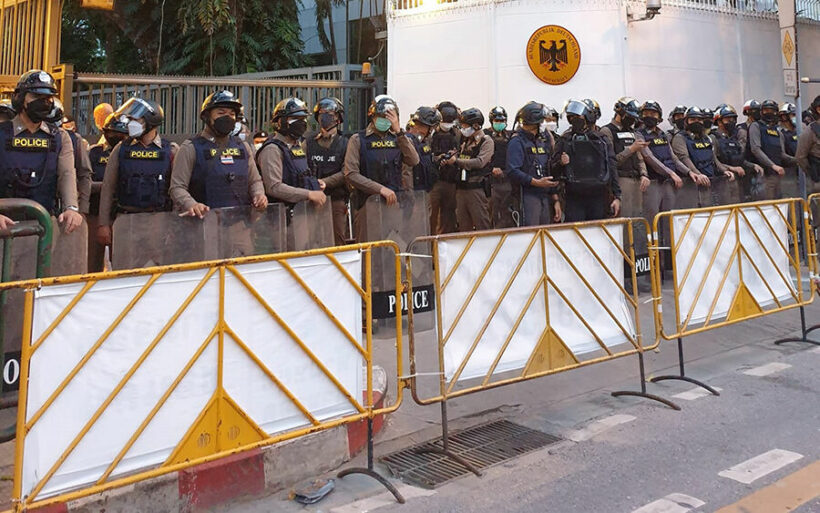 At least 2 anti-government protesters were shot during yesterday’s rally in Bangkok, which culminated with activists delivering a letter to the German Embassy. (Some reports in Thai media say 3 protesters were shot.) Protest leader Thatchapong Kaedam said the letter informed the embassy of a recent Constitutional Court verdict that ruled that 3 activists were guilty of plotting to overthrow the monarchy. According to a Thai PBS World report, the rally representatives who delivered the letter said an embassy official promised to give it to the ambassador.

The 2 protesters who were shot have not been named but are understood to be a 23 year old man and a 33 year old. They have both been admitted to hospital. The shooting occurred outside the Police General Hospital as protesters were making their way from the Pathumwan intersection to the German Embassy on Sathorn Road.

Protesters began gathering at the intersection at around 3pm, after police blocked access to the planned assembly point at the Democracy Monument. Activists also gathered at Bangkok Art and Culture Centre. At around 4:14pm, effigies of the 9 Constitutional Court judges were hanged and burnt, according to the Thai PBS World report. At 4:30pm, Thatchapong led the march to the German Embassy, with activists forced to use other routes as police blocked access to the Ratchaprasong intersection. Additional riot police were deployed at the Lumpini intersection but were unable to hold back the protesters.

At around 6:25pm, the letter to the German Ambassador was read out to activists assembled in front of the embassy, before then being delivered to an embassy official. Thatchapong then asked protesters to disperse around 7pm.

Stardust
18 minutes ago, gummy said: A bit of topic but perhaps it illustrates why recent events are occurring as the leader of this government has a history of such organised thuggery. Thailand’s 2010 Red Shirt Protests and the Government Crackdown…

gummy
17 minutes ago, Stardust said: But as you can read the trolls are already out to defend the shooting and even making jokes about it. And I guess more will come. Yes such a shame those people can find the…
Griff1315
51 minutes ago, Stardust said: This should be reported now you are spreading fake news all the the time and conspiracy theories on the forum permanently! Just a CCP docrinated Troll. His favourite regime are guilty of far worse than…

Faz
Topic locked for review. Post writing tips: Refrain from using slang, uncommon abbreviations, acronyms and “text-message” style substitutions for words. As we are both a multi-age and a multi-national forum, not everyone may understand what you are saying or used…