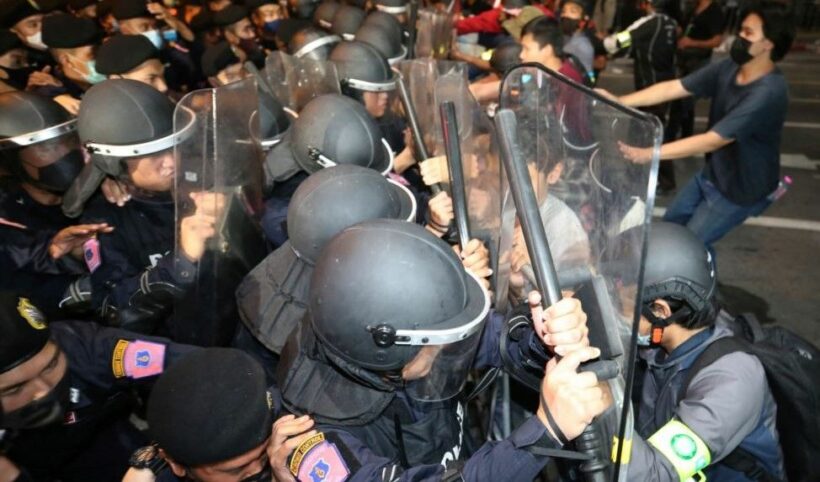 Over 12,000 officers will be on duty for planned anti-government protests set to take place outside parliament today and at other significant locations in Bangkok over the weekend. Tomorrow, MPs will vote in a no-confidence motion against PM Prayut Chan-o-cha and 9 members of his administration. The Bangkok Post reports that the “Mob Fest” Facebook page carries a message urging supporters to show up to a rally outside the parliament building at 5pm today.

“We will watch a live broadcast of the no-confidence debate on a big screen. We will yell at the government and debate on 10 urgent issues proposed by the people. Over the past seven years since General Prayut Chan-o-cha seized power, he has taken the people on a roller-coaster ride with a host of promises and it has all come crashing down.”

The United Front of Thammasat and Demonstration, a division of the pro-democracy Ratsadon group has confirmed that a rally will also be held on Saturday, with the time and location to be confirmed today. The protesters are expected to rally at the Democracy Monument and outside parliament at the Kiak Kai intersection.

Human rights lawyer Anon Nampa has called on activists not to resort to violence against the authorities. Currently in custody and charged with various offences including lèse majesté, Anon has also been named as Time Magazine’s “100 Next” emerging leaders.

Piya Tawichai from the Metropolitan Police Bureau has confirmed that 12 companies of 1,800 officers will monitor protests at the weekend, while deputy national police chief Damrongsak Kittiprapas says 69 companies of 10,350 officers from 9 provincial police regions are being drafted in to support the MPB. Speaking about the upcoming protests, political science lecturer Wanwichit Boonprong says confrontations between pro-democracy activists and the police could turn violent.

Meanwhile, the Constitutional Court is to rule on the legality of proposed charter amendments. Once the no-confidence debate ends tomorrow, there will be a week left before parliament goes into recess on February 28. In that time, there will be a second reading of the proposed amendments on February 24 and 25. It’s understood over 100 MPs have requested an adjustment of 2 amendment bills, 1 of which was proposed by the government and the other from the opposition.