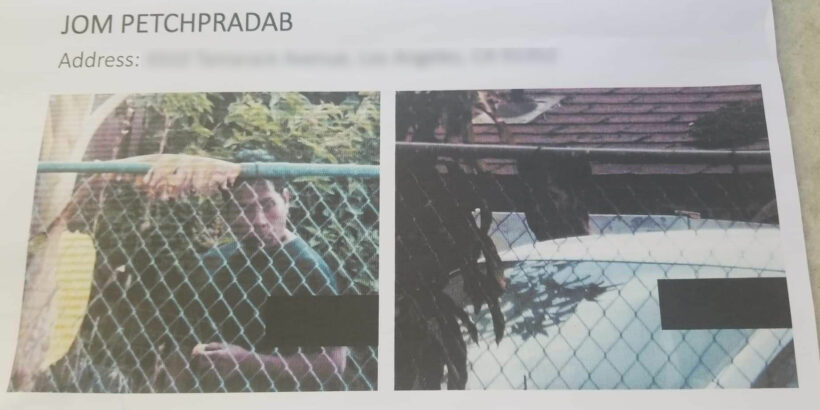 Threatening packages have been sent to 3 Thai critics of the monarchy that live overseas including well-known Thai journalist Jom Petchapradad and Red Shirt activist Phontip Weeden who both live in Los Angeles in the US.

Another who received a package was Andrew MacGregor Marshall, a Scottish journalist and writer of the 2014 book “A Kingdom in Crisis,” which is banned in Thailand. Andrew, who lives in England, says the 3 of them were targeted last weekend by people who had been “watching” their homes and sent packages intended to intimidate.

The parcels sent from Thailand had photographs of their homes as well as a photo of the book “Catch Me If You Can.” Jom received a FedEx package which had photos of himself walking in front of his house. Andrew posted on Facebook saying his package was left in a gift bag in front of his door with the words “A special something just for you.”

“Inside were some items that showed I had been followed over the previous few days, as well as a printed message that said ‘Greetings from Thailand!”

While the 3 packages were each a little different, Andrew says the message is the same.

“In each case we were surveilled and then sent a message to show that the Thai regime knows where we live and could easily cause us harm if they wanted to in the future.”

The packages were sent from the Northeast province Sakon Nakhon, but Andrew says the address appears to be fake and believes it was actually sent from Bangkok. Nation Thailand reports Jom filed a complaint with the Los Angeles police.

Jom says that while he is living in the United States, he is not free from the Thai government. Some Thais who live in Los Angeles accuse him of undermining the Monarchy and working for the former PM Thaksin Shinwatra.

In his Facebook post, Andrew mentions there have been 10 exiled Thais that have been “disappeared” abroad since 2016. Pro-democracy activist Wanchalearm Satsaksit, who self-exiled in Cambodia, disappeared in June. Surveillance camera footage shows him being taken into a car. Andrew claims his friend Wanchalearm was abducted and murdered, without providing any evidence of the murder claims.

Last year, two exiled activists were found dead in the Mekong River bordering Laos, according to Nation Thailand. The UN Human Rights Office says it is “profoundly concerned” with the reports of enforced disappearances in Southeast Asia.

Andrew says all Thai activists need to be aware of the increased risk and look out for signs of surveillance.

Royalist group says it will fight any changes to Thai Constitution