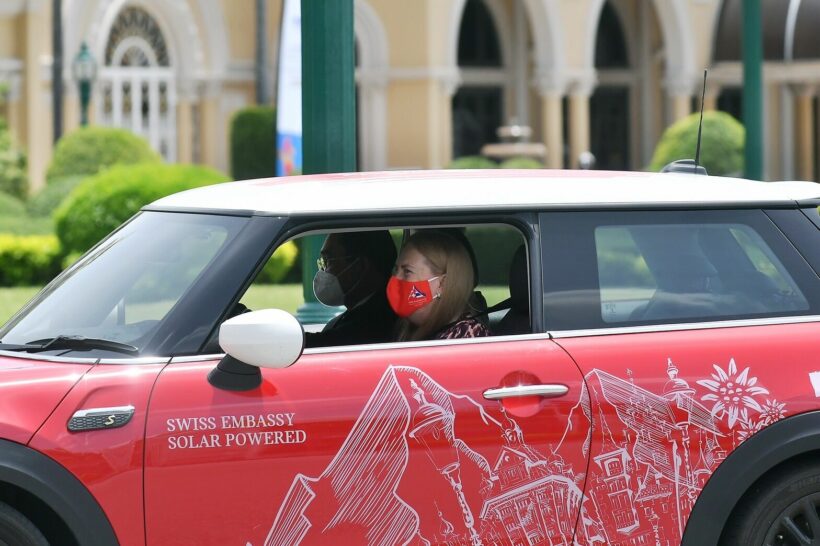 After completing her term in Thailand, Helene Budliger Artierda, the Swiss ambassador, paid a farewell visit to Thai PM Prayut Chan-o-cha at Government House. Helene came to visit Prayut in an electric-powered red Mini Cooper, which caught the PM’s attention during their conversation.

Just before the Swiss ambassador could head back to the embassy, Prayut asked about the car. He liked it so much that he asked for a quick spin around the block.

It didn’t stop there, Prayut asked if he could drive the car. Once he took over the driver’s seat, Helene sat in the passenger seat.

He waved to journalists, reporters, and photographers as he drove around.

After saying their farewells, the Swiss ambassador and other entourage left in PM Prayut Chan-o-cha’s new favourite car.

The Thai PM wants to establish Thailand’s status as a major SE Asian hub for the production of cars, including electric vehicles. Thailand is currently the tenth-largest automobile manufacturer in the world (OICA 2021).

In the next year, Thailand plans to domestically build more EVs and their parts.

By the end of 2022, PTT Oil and Retail Business hopes to grow its EV business by installing more charging stations in shopping centres across the country.

Bluesofa
8 minutes ago, Fanta said: Prayut seems like vehicles without engines. Ha ha! Very good. An aircraft carrier, a submarine. Perhaps we'll see him on a bicycle next week?

Stefan
Great to see that Prayut likes this EV. And good to hear that he wants Thailand to become an EV production hub. (although we have too many hubs already...)  Follow other countries and ban combustion engines 15 years from now!
HiuMak
Soon he will be driving alone after the election
TWS60
Was just pondering why Hybrid vehicles were so slow to enter the Thailand market.  Welcome to the party, better late than never.    Despite his short-comings, and the looming election, Prayuth's enthusiastic reaction to an EV was like he'd just seen…