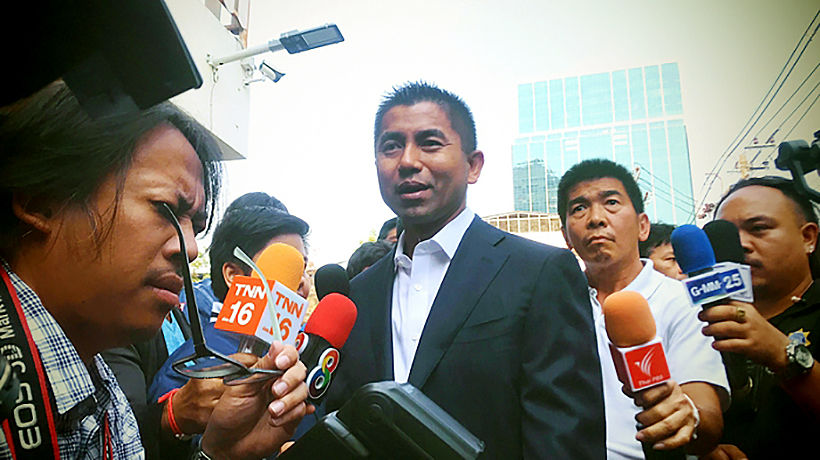 “There’s only one motive” – Surachat Hakparn

The former Thai immigration police chief Surachat Hakparn, aka.”Big Joke”, denies that the incident, where gunshots were fired into his car on Monday, was a staged stunt. But he has addressed a media scrum speculating the incident is linked to the Immigration Bureau’s controversial procurement procedures for its biometrics and smart car projects.

Surachat has already handed over documents relating to the projects to investigating police while being questioned at Bangkok’s Bang Rak police station on Tuesday.

The media-friendly former chief of immigration police, who many predicted would one day become police commissioner before his untimely side-lining from duties in April 2019, told reporters he believed his efforts to block the projects was the only possible motive for the attack on his white Lexus SUV.

“There is a single motive behind the shooting… those whose interest in the biometric system procurement was affected. When I was the Immigration Bureau chief, I cancelled it.”

In a written statement, whilst still heading up the immigration police last year, Surachat urged national police chief Chakthip Chaijinda to consider cancelling the projects. The projects, together worth two billion baht and which have since gone ahead, involved the purchase of biometric equipment to scan faces and fingerprints of passengers at Thailand’s six major airports. At the time Surachat cited long delays and questioned the equipment’s efficacy as reasons for wanting to cancel the project.

After Surachat was unceremoniously dumped from his senior post, and put into a civilian advisory role with the PM’s office, his successor said the committee selecting the contractor had to be “fair to the contractor.”

His successor, the current immigration chief, has seemingly gone out of his way to praise the new biometrics system at the airports. He has called media conferences often to point out the successes of the system when it has identified suspects passing through airports and leading to arrests.

Meanwhile, Sittra Biabangkerd from the People Lawyers’ Team Foundation is petitioning the National Anti-Corruption Commission to investigate the decision to go ahead with the procurement of the new biometrics system – Surachat denies any connection with Sittra’s move.

Sittra says the shooting was linked to the NACC’s intention to call Surachate to provide more information as part of the graft probe. He’s been posting on his Facebook page in his efforts to keep the petition public.

Surachat says the incident has neither intimidated him nor dissuaded him from talking to the anti-graft agency, should they want to interview him. But he’s warned the national police chief Chakthip to take responsibility if police could not find the men who shot at his car.

Bangkok police say the placement of the bullet holes shows the attackers probably meant to ‘make a statement of warning’, not to kill him. Either that or they were very poor shots. The bullets all, but one, entered the lower section of the passenger side rear door. There was no one in the car at the time of the incident on Monday evening.