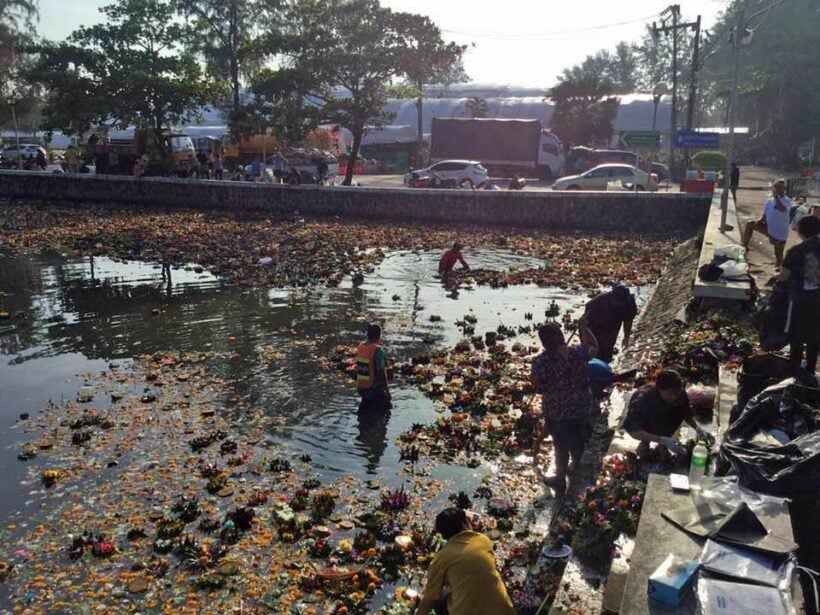 PHOTO: Krathongs being cleared out of a lake at Saphan Hin in Phuket – Newshawk Phuket

The clean up is still underway in many parts of Thailand following Monday’s Loy Krathong. ‘Favourite’ waterways are still being cleared of the pre-loved Krathong floats. The good news, authorities say there was a lot more natural products used in this years’ krathongs following a wide campaign to encourage Thais to stop using polystyrene and steel pins in their floating, floral masterpieces.

In Chiang Mai, krathongs are still being collected from the Ping River, four days after the end of the  festival. In parts of Chiang Mai the festival ran until the end of Tuesday.

The Nakhon Chiang Mai Municipality says volunteers were helping municipal staff remove the left-over krathongs from the river. Krathongs made of recyclable materials were also being separated for use as fertiliser and garden mulch. It’s expected the cleanup will be completed today.

Chiang Mai authorities estimate some 40 tonnes of floated krathongs will be collected this year. But they note that this is a drop from the 70 tonnes collected a few years ago. They believe this is probably because of the ‘One family, one krathong’ promotion the government ran in the weeks before the annual festival.

Meanwhile, over the border, nearly 5 million people flocked to Cambodia’s capital Phnom Penh during the three-day Water Festival holiday, according to a report issued by the Ministry of Tourism. The Khmer Times reports that the vast majority were Cambodians sprinkled with 31,446 foreigners.

The annual Water Festival, held at the same time as Thailand’s Loy Krathong, is one of the main holidays in the Cambodian calendar. Traditionally, people from across the country come to Phnom Penh to watch boat races in front of the Royal Palace during the day as well as light displays on boats and fireworks during the evenings.