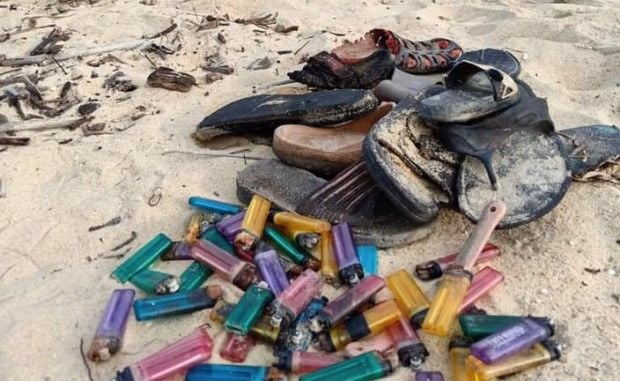 Flip flops, sandals, thongs, whatever you want to call them, are often seen washed up on beaches along with plastic bags and bottles. Those old, forgotten shoes are being transformed into new flip flops by a Pattani company called Tlejourn, a Thai phrase meaning “wandering across the sea.”

Using old sandals found on the beach, Tlejourn cleans and shreds them to make small pieces. The pieces are then mixed with polymer glue and molded into the shape of a thong sandal. About 10 old shoes make 1 pair of flip flops. A pair of Tlejourn flip flops costs 399 baht. The shoes are made by locals in Pattani and most of the debris is collected from nearby beaches, the company says.

The project started almost by accident. Prince of Songkla University lecturer Nattapong Nithi-Uthai contacted Trash Hero, a volunteer organisation with local cleanup groups, to ask for some ocean waste to experiment with. The volunteers showed up to his house with thousands of flip flops. They were mismatched, torn up by the sea and some had barnacles growing on them.

Trash Hero Pattani volunteers collect marine waste found on beaches throughout the Satun islands in Southern Thailand. At one point they gathered 80 tons of flip flops in a 3 month period, Tlejourn says.

With a load of old, worthless flip flops, Nithi-Uthai worked with other university scientists on a plan to recycle trash and turn them into quality shoes. The company now operates on a zero profit model. Trash Hero supplies most of the ocean debris used to make the sandals. Tlejourn also collaborates with companies to come up with special designs for the upcycled shoes.