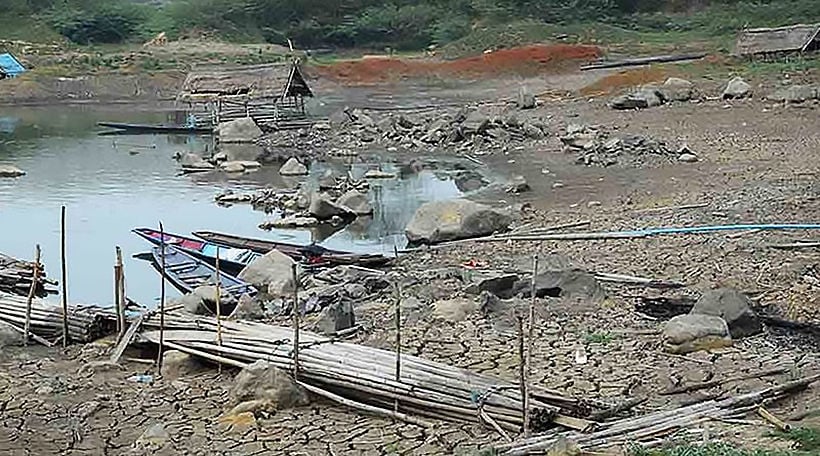 As Thailand faces its worst drought in 40 years, officials in Chon Buri met yesterday to discuss a solution regarding lack of water and low water pressure in the province’s Sattahip district, south of Pattaya, also the home to a naval base.

Responding to many recent complaints, Sathira Pueakprapan, a member of the council in Chonburi, told reporters that Sattahip area receives water from three main providers – the water works authority in Sattahip, Ban Chang and Pattaya.”

“Many areas in Thailand are facing drought problems as well as residents in Sattahip. This is causing some areas to have no water and some to have weak water pressure. Additionally, these problems can be unpredictable and last for extended periods of time.”

“We have confirmed that the overall water supply is still enough in the area until June which will be the end of the dry season. However, please save and conserve water in the interim period.”

“We are trying our best to solve the water problems and divert water from the areas with higher levels of supply.”

But a spokesman for Thailand’s Meteorological Department painted a bleak picture.

“There is unlikely to be any rain until the beginning of the rainy season in May, and high temperatures brought on by the climate condition known as El Nino will prevail.”

Even in the tourist island of Phuket, where 84% of the economy relies on tourism, the three main catchments are either a lot lower than in the past or, in the case of Manik Dam in Srisoontorn, completely empty.

The TMD predicts 2020 is likely to be worse than 1995 and 2015/2016, when water needed to be drawn up from aquifers. Residents in Bangkok and surrounding areas were affected and competed for meagre water resources. Roads cracked, riverbanks collapsed and saltwater seeped into the groundwater in Pathum Thani province, affecting the local tap water supply.

Thailand commonly suffers from both drought and flood, and plenty of both. But as demands on agriculture grow, along with population, tourism and development, the effects of these extremes become more evident and critical. Critics say the outlook of scarce rains for 2020 exposes the poor management of the Kingdom’s water resources.

“The government is perpetually locked into historic and ineffective practices that haven’t kept pace with modern agriculture.”

This year’s long dry season is expected to produce lower farm outputs and push up prices, even as overall farm income declines due to the drought. This will affect the purchasing power of farm households, which account for one third of Thais.

SOURCES: The Pattaya News | The Nation