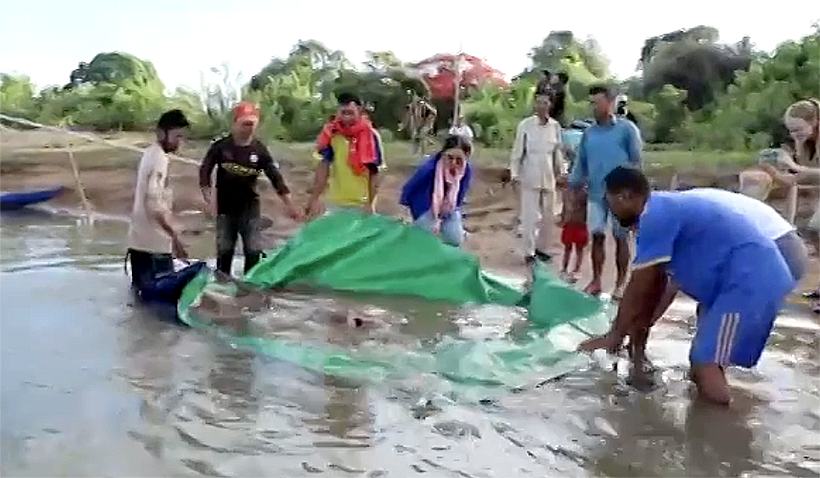 HOW big was the stingray?!

An enormous freshwater stingray was rescued and released in a Cambodian section of the Mekong River on May 5 after being ensnared earlier by local fishermen. The monster fish was 4 metres long and weighed around 180 kilograms. Brown on the top and a shade of white on the bottom, the fish usually along the tropical riverbeds in search of food.

The endangered freshwater stingray, the size of a large table, was snared on a fisherman’s line early in the morning. But it would take the rest of the day to unsnare the beastie and get the right people in place to organise a safe release.

Over-fishing for the stingray meat, the frequent accidental deaths and the Mekong’s degradation from upstream dams, pollution and other human activities are putting these mighty fish on the endangered list.

Despite being non-aggressive, their sheer size posts a danger for the handlers, and the 30-50 centimetre-long barbs on its tail which will give a human recipient a lot of pain. But the most dangerous aspect of the stingray barbs is their ability to puncture skin and organs of humans. Inadvertently stepping on a stingray in the shallows or swimming into one in the open water could make the animal react and use its barbs as a defence mechanism.

Only two fatal stingray ‘attacks’ have been reported in Australian waters since 1945, one being the high profile death of media conservationist Steve “Crocodile Hunter” Irwin when a stingray barb pierced his heart, killing him instantly, in 2006. To say the least, stingray attacks are extremely rare.

Before the team of marine biologists, and a group of local volunteers, helped the huge fish back into the Mekong’s waters, they took some non-invasive samples to help with their better understanding of the local species and the DNA of the mighty Mekong River.

Then, extra care was taken as the fish was carefully manhandled back into the water, avoiding the barb that could have ruined the day of any of the rescuers.

Local conservationists noted that coming across a sample of this species, at such a colossal size, was a rare event. Despite the rare find there are numerous local stories of even bigger ‘rays’ being caught and hacked up for sale at local food markets. “HOW big was the stingray?!”

Poolie
Point of order: you can't have a 'shade of white.' Pick another colour. White is none of the colours.

PapayaBokBok
I recall stepping on a few of these down south in the ocean--creepy feeling under your foot--yikes!
HiuMak
18 hours ago, Thaiger said: The endangered freshwater stingray, the size of a large table, was snared on a fisherman’s line early in the morning. But it would take the rest of the day to unsnare the beastie and […]…