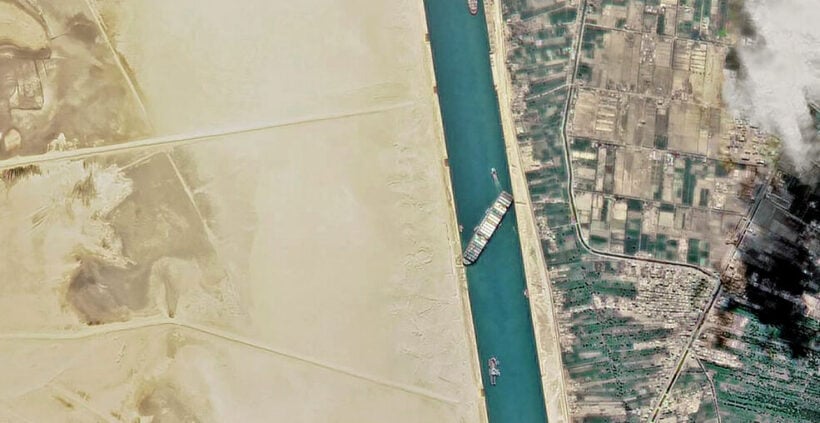 That container ship is still stuck in the Suez Canal. It’s created a huge traffic jam at either end – some 240 ships. Even if they clear the blockage (get the ship out of the way to let other ships pass) soon, it’s predicted to take most of April to clear the backlog. The cost to world shipping has been estimated at 9-10 billion US$ each and every day.

The Ever Given is 400 metres long, about as long as the Empire State Building is high, and weighs 200,000 tonnes. The ship ran aground, stuck sideways in the Canal, last Tuesday with high winds and a sandstorm affecting navigation.

Not going to affect you? Think again.

The Ever Given has become Very Stuck and is delaying the shipment of goods from Asia to Europe and North America, and back the other way, through the world’s busiest shipping channel, handling some 12% of the world’s shipping traffic. Despite the ship’s rudder and propellor being cleared, the ship is still firmly wedged in place.

Apart from a whole variety of household goods waiting to get through, there’s also oil tankers and livestock waiting patiently for the vital sea-route to be unblocked. Crude oil markets have already added 3% increase to the price per barrel in reaction to Ever Given’s not-going-anywhere-fast situation.

Pre-Ever Given, there was already a shortage of ships and containers as the world, unable to physically fly from here to there, have been spending their disposable income on online shopping, stretching global supply chains to the limit. Whilst passenger planes were quite easily converted to cargo planes, taking up some of the cargo slack, the world’s shipping fleet was already hard at work. Spare containers were few, ports were congested. In some of the world’s busiest ports – from Shanghai to LA, Singapore to Busan, Bremen to Laem Chabang – ships have been at anchor, for longer, waiting to be unloaded in recent months (7 out of the top 10 world’s busiest container ports in the world are all in China).

Even if there is a sudden move to air freight or alternative routes, the impact of either solution will quickly add to the costs of transporting goods globally.

Although manufacturing was hard hit in the early days of the pandemic, the pickup later in 2020, both in manufacturing and our demand for goods (furniture, TVs, inflatable pools, exercise machines, electronic and gaming gadgets, and clothing) has stretched the supply chain and contorted it as companies re-aligned those chains and sought new markets (remember the US-China trade spat was all happening at the same time last year).

This unexpected consumer demand has shot up the cost of moving the standard 40 foot container. The average cost to ship just one container has gone up from US$1,040 in June, 2020 to $4,570 at the start of March, 2021, according to S&P Global Platts. Guess who will eventually pay for the additional costs of shipping? And the current blockage will only exacerbate the problem, making shipped goods more expensive, faster.

The current, and unscheduled, closure of the the Suez Canal will cause shortages of products, from agricultural products, livestock to computer parts, car parts, wines and all smartphones coming out of Asia. The list of affected goods is long.

The obvious solution (try another route) will just delay shipping longer and further delay the arrival of ships and containers. The longer routes also add additional cost. The return journeys will also be delayed, etc, etc. About 80% of the world’s total trade, by volume, travels by sea.

There are also some key indicators which could be hugely affected by this one ship blocking the Suez Canal. The ‘Fed’ (the US Federal Bank Board) has been fearful of inflation kicking in which could trigger a number of financial pillars – one being a shock to the US stock market. Rising costs will put additional pressure on inflation and leave the Fed less room to move to counteract any major reversal in the US share market.

So the entire world can expect both rising prices for many goods and delays in anything that’s coming from overseas by ship. That this situation may happen sooner rather than later will be the fault of on stuck container ship.

Crude oil imports to Thailand at lowest level since 2015