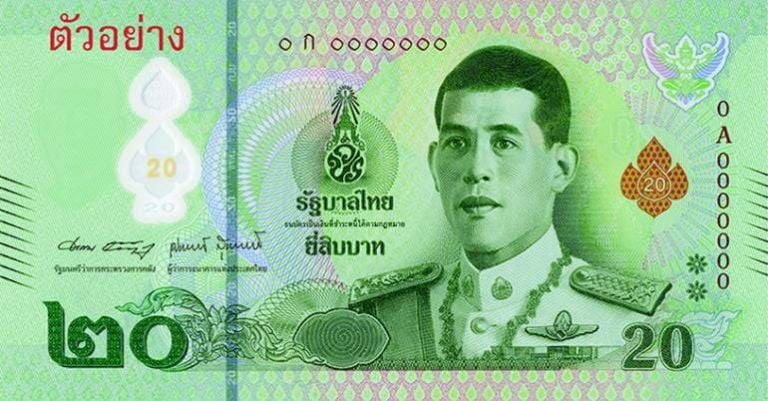 PHOTO: The new 20 baht bills will be made out of a cleaner, more durable polymer.

Money enthusiasts, get ready! On March 24 the 20 baht bill is getting a radical new update. The Royal portrait will still be prominent but the flimsy, green paper the bills have been printed on for decades is being replaced with a modern new polymer with a glossy, plasticky feel.

Starting on March 24, the new, more durable polymer 20 baht banknotes will enter circulation and become legal currency, available at all financial institutions and commercial banks around the country. Anyone who wishes to do so can bring their old paper bills to these banks and exchange them for new polymer notes.

Polymer banknotes were first invented by the Reserve Bank of Australia and the Commonwealth Scientific and Industrial Research Organisation in 1988.

The Bank of Thailand has issued these new bills using polymer instead of paper because they are more clean and stronger than the old notes. They do not absorb dirt or humidity which makes them cleaner and since they’re much more rugged and durable, they don’t need to be taken out of circulation and replaced nearly as frequently as paper bills, making them more environmentally friendly.

Polymer bills like this new 20 baht note are used in many other countries already, including Thailand’s neighbor to the south Malaysia and Singapore beneath that. Vietnam also uses polymer bills, as while as Australia, the UK, and Canada.

The design of the new polymer 20 baht note won’t be wildly different from the current paper bill in circulation, but they will have the neat little transparent window in them as well as and embossed number 20 for added security.

The older versions of the 20 baht note will still be in circulation, and remain legal tender, but will be swapped out over time with the new polymer versions.

Faraday
8 hours ago, Noble_Design said: Nice... would really like to see notes printed on Tyvek as well. What's Star Trek got to do with it? SkipsPa
5 hours ago, Bluesofa said: We've had a polymer 50 Baht banknote for years already. I have a good few notes featuring the reigning king and earlier ones of his father but haven't seen a polymer note yet (ignoring my…

Bluesofa
1 hour ago, SkipsPa said: I have a good few notes featuring the reigning king and earlier ones of his father but haven't seen a polymer note yet (ignoring my UK ones :) ) A good point. I was starting…