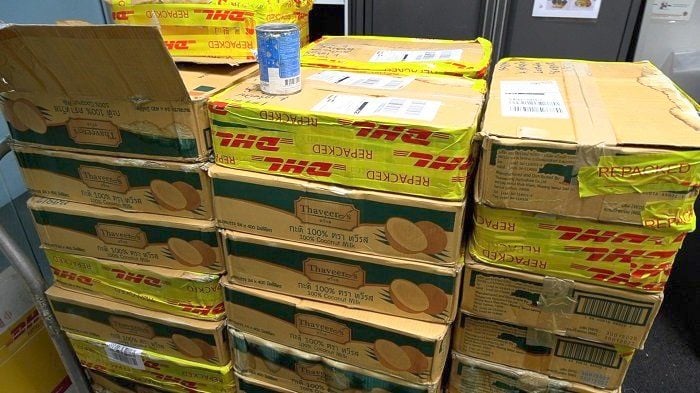 Thailand police are looking suspects who smuggled nearly a tonne of liquid methamphetamine in cans of coconut milk. The cans were shipped from Thailand to Sydney. Australian police seized the 600 litres of methamphetamine and arrested 2 people for taking the delivery.

86 boxes of cans of “coconut milk” were shipped from Thailand to Sydney last month, according to the Australian Federal Police. The country’s border police tested the liquid and found it was positive for methamphetamine.

Australian Federal Police took the package out for delivery over the weekend and arrested a 29 year old woman and a 20 year old man for taking the package. They were charged with attempting to possess a commercial quantity of an unlawfully imported controlled drug. They face up to life in prison.

Thailand’s Narcotics Suppression Bureau Chief Chinnapat Sarasin says drugs may have been sent by boat through a private parcel company, the Nation Thailand reports. However, the Australian Federal Police say the package is an “air freight consignment.”

The Nation Thailand claims Thailand police have only dealt with crystal methamphetamine busts and have not seen the drug in the liquid form.

Both Thai and Australian police are still investigating.

Two people have been arrested in Western Sydney and an estimated 600 litres of liquid meth concealed inside cans of coconut milk has been seized. More information: https://t.co/7Q53z40LbF pic.twitter.com/m6UuZXAJpP