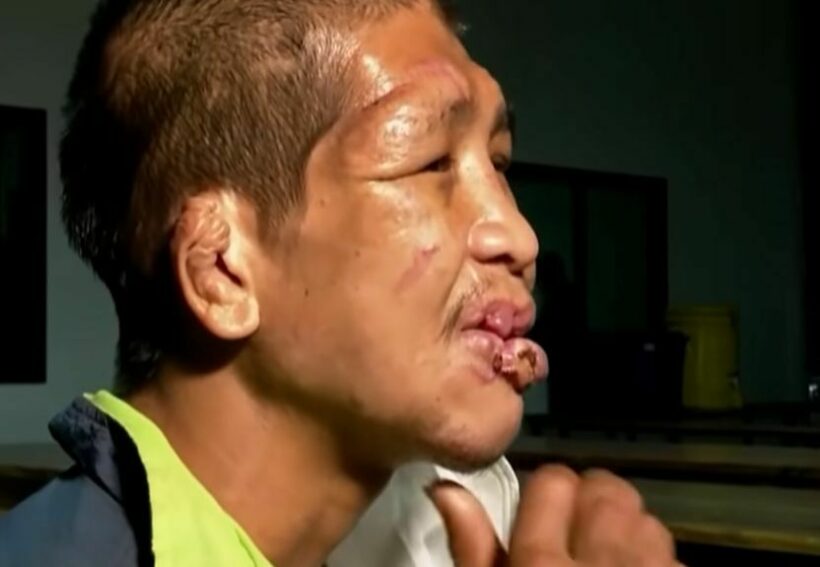 A man, badly bruised and face swollen, reportedly showed up to a local police station claiming his employer has been abusing him for more than a decade, beating him with a PVC pipe and forcing him to drink dog urine. The 29 year old worker, identified as Fah, told police he managed to escape. Welts, wounds, and bruises were all over his body and his eyes were nearly swollen shut.

The employer, known as Jeh Gung, allegedly admitted that she had beaten Fah, but claimed it was because there was a lesson to learn. She reportedly told police that not all of the injuries were inflicted by her, saying that Fah had sustained some from a motorbike accident and by slipping. She also reportedly told police that she never forced Fah to eat animal feces or urine, and only threatened it as a punishment.

Jeh Geng allegedly told police that she started caring for Fah 10 years ago as a mother figure. Apparently another person at the workplace was involved in beating Fah, but reportedly told police a statement similar to Jeh Gung’s, that the punishments were done with good intention to make Fah to be a better person.

Geo
If 100% correct she is one disgusting piece of crap. Let her have some off the punishment. Looking at the photos you don't substain those types of injuries in a motorcycle accident. I think she took advantage of this poor…
HolyCowCm
And how would you like your dog poo poo served? Puree or fried?
Jason
This is a shocking account of abuse and the evidence is clear. I am only glad that this poor man finally got up the courage to go to the authorities and report this heinous crime against him. That this maltreatment…

PapayaBokBok
Thainess 101
DiJoDavO
I thought the boss was some kind of huge wrestler..... If it was some 50 year old woman, was there no way to defend or at least escape since it began?